The javelin which saw Neeraj Chopra create history is placed at a base price of Rs 1 crore. 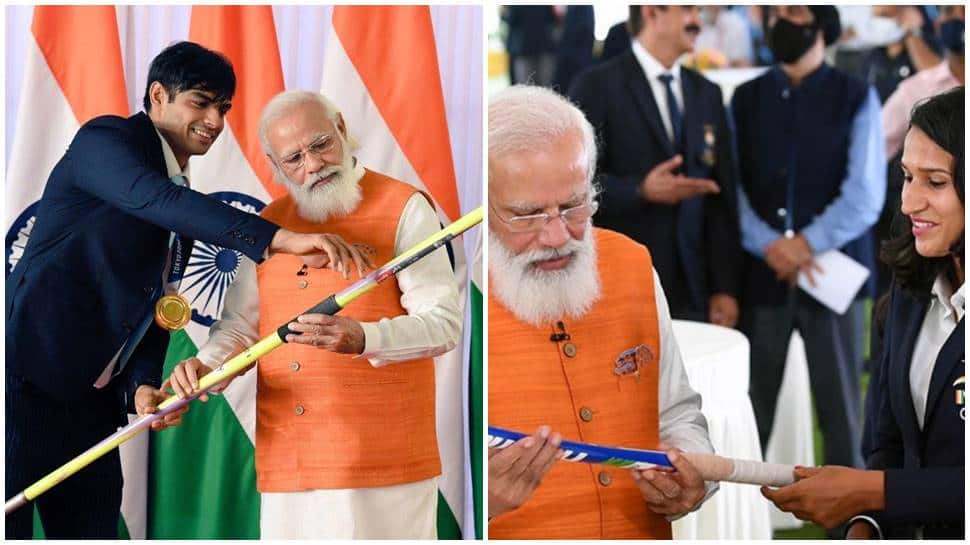 The Indian unit had a great outing at the recently-concluded Tokyo Olympics and Paralympics, where the country finished the megaevent winning 7 and 19 medals respectively. The achievment of our athletes was lauded by Prime Minister Narendra Modi, who dedicated a day to meet both the Indian contingent separately.

On both the occasion, the Prime Minister was showered with presents by both the Olympians and the Paralympians, and out of those items, 15 have been put for an online auction that has a value of over Rs 10 crore. The auction process, which is looked by the culture ministry, started on Friday.

As per a report in News18, a wide range of sporting equipments which include Neeraj Chopra's gold winning javelin and the hockey stick of Indian women hockey captain Rani Rampal, are part of the auction. In fact the javelin which saw Chopra create history is placed at a base price of Rs 1 crore.

"These items in the end may fetch even more during the auction given the euphoria in the country over the performance of the Olympic and Paralympic contingents and we expect people to bid encouragingly for these items," a senior government official was quoted as saying in the report. He added that all the revenue generated from the event will be given to the Namami Gange Mission to clean the Ganges.

As per the report, here are the base value of other items:

Two stoles signed by the athletes and para-athletes has a base price of Rs 90 lakh.

Meanwhile, the hockey stick of Indian women hockey captain Rani Rampal also has a base price of Rs 90 Lakh. "The blue coloured hockey stick includes a logo named Rakshak written in white, and the model number is Rani 28, which directly points to Rani Rampal, the captain of the Women Hockey Team of India and 28 is her jersey number. The signatures of the entire Indian hockey team run along the body of the hockey stick," the description reads.

PV Sindhu's badminton racquet, which she won in her bronze medal match is also placed at a base price of Rs 90 lakh and a hockey stick signed by the men’s team is placed at  Rs 80 lakh.

A badminton racquet signed by Pramod Bhagat, which he used in his gold medal match at the Paralympics, is placed at Rs 90 lakh.

Lovlina Borgohain's gloves at Rs 80 lakh, Bhavani Devi's fence has a base price of Rs 60 lakh.

The shooting glasses worn by Manish Narwal are placed at Rs 20 lakh while the Bhavina Patel's jersey which she wore during her finals is up for grabs at a base price of Rs 15 lakh.