A blockbuster clash between comeback girl Geeta Phogat and world championship bronze medallist Sarita Mor is keenly anticipated, while Narsingh Pancham Yadav and Gourav Balian will also be eager to prove themselves when the National Wrestling Championships begin here from Thursday. 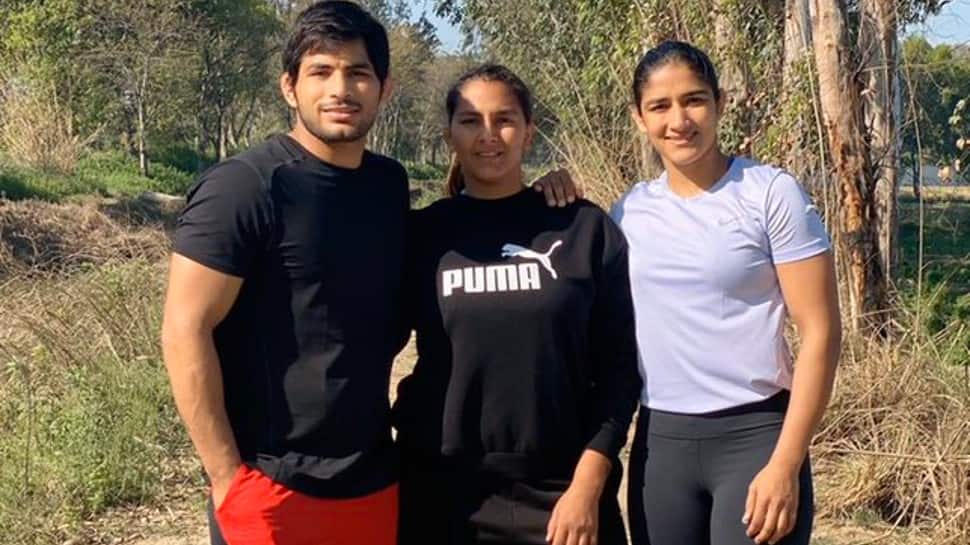 Geeta Phogat, 32, is making a comeback to competitive wrestling after giving birth to her son, Arjun in 2018. Set to compete in 59kg, the national event will help Geeta assess herself as she has a long term goal of competing in the 2024 Paris Olympics. Much water has flown under the bridge since she stopped competing on the mat and it will be interesting to see how the 2010 Commonwealth Games gold medallist responds to the challenges ahead.

New rules are in place and the standard of Indian wrestling has also improved in the last few years. But she has got a good start as save the close semifinal, Geeta easily cleared the state trials where she beat four Haryana grapplers to emerge the winner.

"My confidence got a good boost at state trials. I am pretty excited for the Nationals. It feels like a new beginning," Geeta told PTI. Her biggest competitor would be Sarita, who last month won a bronze at the Oslo Worlds, where she beat defending world champion Linda Morais en route to the bronze play-off. Notwithstanding the world championship success, Sarita still finds the national championships exciting.

"Since childhood, we target playing the Nationals because from here the avenues open up for all of us. It still excites me to compete with the best wrestlers in the country," Sarita told PTI.

"Life did not change much after the Worlds medal but definitely the respect and recognition is there. It feels good." Geeta praised Sarita for her steady progress.

A big kudos to the Phogat sisters for putting on a fine performance at the #YasarDogu2018.

While @geeta_phogat (-65 kg) got the better of Sofiya Hristova Georgieva for a bronze medal, @sangeeta_phogat (-59kg) too bagged a bronze by beating Yuliya Pisarenka. pic.twitter.com/mJ7UlsuF0T

"I know she will be my main competitor. She is also a two-time Asian champion but I know her game. She really fights hard. It will be an exciting clash if it happens with Sarita. I am ready for it," said Geeta.

Sangeeta Phogat, who married Olympic bronze medallist Bajrang Punia, also made a comeback recently after an injury and exceeded everyone's expectations, including her own, when she won the world championship trials. She made an early exit from the Worlds but she is feeling confident about her game. Sangeeta will compete in the 62kg category.

Coming into the Nationals, she trained under Kuldeep Singh with her husband Bajrang. "I was a bit nervous after making a comeback at the World stage. I felt I could beat those girls but perhaps I stopped myself from playing to my potential due to initial jitters, the confidence was lacking but now it's over, I am feeling much better and looking forward to a successful next season," Sangeeta said about her experience in Oslo.

Young Sonam Malik is still not fit enough to make a comeback after undergoing an elbow surgery and she will be missed in the 62kg category competition. Also missing from action will be world championship silver medal winner Anshu Malik and struggling star Vinesh Phogat as both are recovering from their respective injuries.

In the men's event, Tokyo Olympics stars Bajrang and Ravi Dahiya will be missing from the action along with Deepak Punia. In their absence, Narsingh's performance will be tracked keenly. After completing his four-year doping ban, Narsingh has not been able to do much. He even lost the World trials in New Delhi, where the youngsters made a mark for themselves.

"I admit it has taken me some time to get adjusted after making a comeback but I feel good about my game. My speed was not up to the mark and also I was struggling a bit due to this weigh-in on the same day of competition," said Narsingh, who trains in and represents Maharashtra.

"Earlier weigh-in was a day before the competitions, so all of it slowed my progress. But I have trained well for the Nationals. Winning gold is my target and then start preparing well for CWG and Asiad. "I have been doing well in 74kg and eventually I want to qualify for the Paris Games in this category," he said.

In Deepak Punia's absence, Pawan Saroha, the husband of Geeta, is expected to do well in the 86kg category. He will represent Railways. Gourav Balian will also be keen to forget his struggle and strive to do well in 79kg.