The former world number one celebrated her 33rd birthday and fans took to social media to extend their warm wishes on her special occassion. 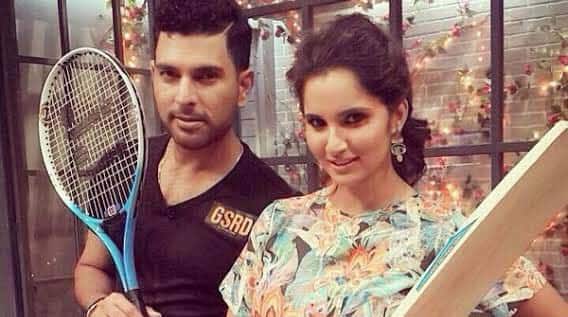 Ace Indian tennis star Sania Mirza turned a year older on Friday. The former world number one celebrated her 33rd birthday and fans took to social media to extend their warm wishes on her special occassion.

However, what caught the eyes was the birthday wish from Sania's 'dearest friend' Yuvraj Singh and the Indian tennis star's reply to the same.

Taking to his official Twitter handle, Yuvraj refered Sania as "mirchi" while extending warm birthday greetings to her. Along with the funny yet adorable tweet, he also shared a picture of Sania with a bat and a photo of him carrying a tennis racket.

In reply, Sania too pulled Yuvraj's leg by terming the former batsman as "motu"."Hai motu thank you my dearest friend," she tweeted.

Besides Yuvraj, hordes of fans also wished Sania on her birthday. Take a look:

Wishing A Happy birthday to the evergreen gorgeous queen of tennis in India.....#SaniaMirza pic.twitter.com/9fZ5GbgdSP

Notably, Yuvraj and Sania share a great rapport with each other and their bond is quite evident from the fact that they are ususally seen pulling each other's leg on social media.