India are facing Germany in the men's hockey bronze medal match at Tokyo Olympics on Thursday (August 5) as Manpreet Singh's boys are aiming for first Olympic medal from sport in 41 years. 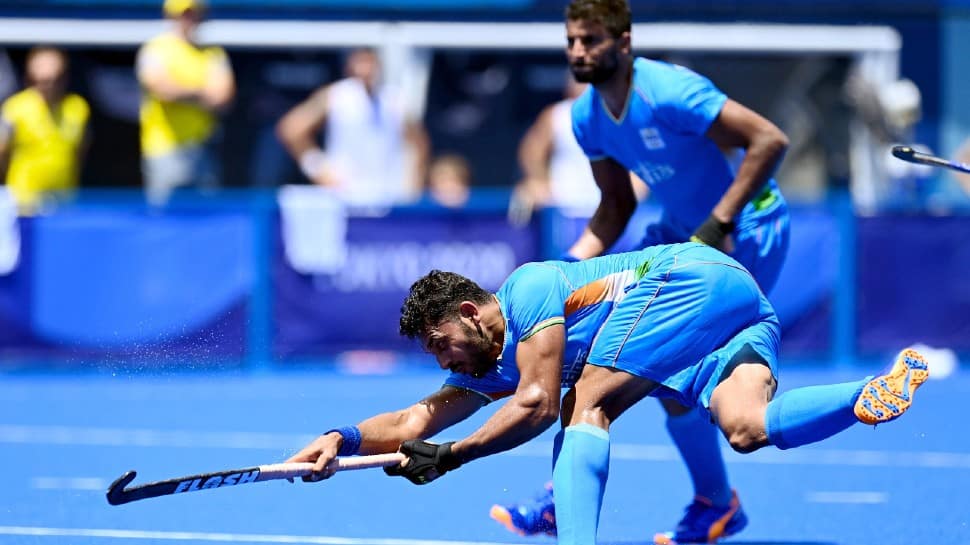 Indian men's hockey team created history at the Tokyo Olympics by winning a bronze, their first medal in 41 years from the sport. Manpreet Singh's side defeated Germany 5-4 in a thrilling third-place clash on Thursday (August 5) to come away with the bronze medal. It was a sensational comeback by the Indian side as they came back from 1-3 down in the 2nd quarter to win 5-4.

Germany managed to claw back into the bronze medal match of the Tokyo Olympics on Thursday (August 5) as Lukas Windfeder scored the fourth goals for the European side to bring them to 4-5 against a resurgent Indian side in the fourth quarter.  India scored two goals immediately after the start of third quarter with Simranjeet Singh adding a second goals of the match give 5-3 lead over Germany in the bronze medal match at the Tokyo Olympics. India secured a penalty stroke a minute into the third quarter of their bronze medal match against Germany and Rupinderpal Singh converted from the spot to put his side up 4-3.

Indians managed to score four goals in the last six minutes of the game after going down 1-3. Harmanpreet Singh converted India's third penalty corner of the bronze medal match against Germany to help India level the 3-3 with just over a minute left in the second quarter.

This was Harmanpreet Singh's sixth goal of the Tokyo Olympics. Hardik Singh kept India in the hunt in the bronze medal match against Germany with his strike in the second half of second quarter reducing the scoreline to 2-3 . Germany's Nicholas Wellen put his side back in front with his 24th minute strike with Benedikt Furt adding a third a minute later to put the Europeans ahead 3-1 in the 2nd quarter.

Simranjeet Singh helped India level the men's hockey bronze medal match of Tokyo Olympics against Germany at 1-1 at the start of the 2nd quarter. It was Simranjeet's second goal of Tokyo Olympics which came off a reverse flick, just a couple of minutes into the second quarter.

India make a comeback into the game with 3 wonderful goals in the second quarter.

Germany ended the first quarter of the bronze medal match against India at the Tokyo Olympics on top. Not only did the European side get the early goal in the contest, but they did most of the attacking, claiming a total of 10 penalty corners as compared to 2 by India to lead 1-0 on Thursday (August 5) after the first quarter of the game. However, India ensured that they didn't concede any more goals, defending against a spate of penalty corners after the clock had already winded down to zero in the first quarter.

India men's hockey team got off to a slow start. Germany's Timur Oruz put his side in the lead after just 2 minutes into the game. The Germans led 1-0 in the first quarter but India managed to hold them back for the next 10 minutes.

A demoralising semifinal defeat behind it, the Indian men's hockey team would need an error-free performance from its defence to secure an Olympic medal after 41 years when it takes on Rio Games bronze-winner Germany in the third-fourth place play-off match here on Thursday.

World no. 3 India played into the hands of world champions Belgium with their defence succumbing under relentless pressure from the Red Lions to concede a bulk of penalty corners throughout the match and lose 2-5 in the semifinals.

The clash between India and Germany would be a repeat of the bronze medal clash of the 2017 Hockey World League Finals. Back then, the Indians triumphed 2-1 against a vastly depleted German team. Having failed to secure the gold medal here after two successive yellow metals in 2008 and 2012 Games, the Germans had to settle for a bronze in Rio 2016 and they would be determined to at least return with a podium finish from here.

Germany are the most successful hockey nation in the Olympics after India with four gold medals. In the Olympics, both the sides have faced each other 11 times recording four wins each and three matches ending in draws.