Ali Qamar, who turns 38 in a couple of months' time, was appointed to the position on Monday night, replacing veteran Shiv Singh. 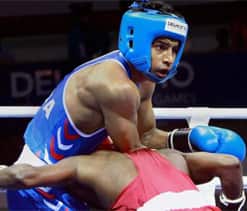 Mohammed Ali Qamar, the man who won India's first Commonwealth Games gold medal in boxing, has taken over as chief coach for the country's women pugilists, becoming the youngest ever to get the top job.

Ali Qamar, who turns 38 in a couple of months' time, was appointed to the position on Monday night, replacing veteran Shiv Singh. Ali Qamar has been an assistant coach in the national camp for more than a year.

In addition, the Arjuna awardee has helmed the Railways Sports Promotion Board's women's team for more than three years.

"It has come as a bit of surprise to me, I got to know only last night and I am thankful to the Boxing Federation of India for considering me worthy enough for the position," Ali Qamar, whose history-making CWG gold came in the 2002 Manchester edition in the light flyweight category, told PTI in an interview.

The diminutive Kolkata native will be working alongside Italian coach Raffaele Bergamasco and will have seven assistant coaches in his team, including superstar M C Mary Kom's trainer Chhote Lal Yadav.

The man he succeeds is well past 60 and there were murmurs of a possible change in the women's camp after the BFI named a 39-year-old C A Kuttappa as the chief coach for the men's camp. India's previous chief coaches for women -- Anoop Kumar and Gurbax Singh Sandhu -- were well over 50 when they took over.

Asked what might have tilted the scales in his favour, Ali Qamar said, "May be the practical knowledge I have gained as an assistant coach. I think the focus is also on getting younger coaches in the camp."

"I might have done something right, could be the feedback from the girls in the camp. Don't know, all I can say is that I will give it my all," said the diminutive former boxer, whose career was cut short by a recurring nose injury.

Did he actually expect the position within a year of joining the national camp as an assistant coach?

"No, not so early, not at 37. I had ambitions of going ahead based on performance but not so quickly. Now that I have been given the responsibility, I think I am ready for the challenge," he said.

Speaking about the complexities of managing women boxers, Ali Qamar said he has understood the nuances now.

"It is a challenging job, no doubt about that. Ek saal toh inko samajhne mein his nikal gaya (I have spent the last one year in understanding them). Now, I think I have got a hang of how things work," he said.

"The toughest aspect is the selection process. Although the coach hardly has a role in it, campers might feel that we can influence selectors. It is not easy to handle the heartbreaks and the perceived biases," he added.

On his plans for the camp after getting the top position, Ali Qamar kept his cards close to his chest.

"I can only say that I will focus on fitness. In a contact sport, fitness is paramount. I will make a few changes to the training schedule as well but I will discuss them with my fellow coaches first," he said.

Then came the question that has cropped up quite a lot ever since M C Mary Kom became a world champion for an unprecedented sixth time last November. Is Indian women boxing struggling to move forward given the way she continues to dominate?

Ali Qamar said fresh talent is coming up too.

"I saw a few really good youngsters at the Nationals, especially in the lighter weight divisions," he said.

"Our focus should be on Olympic weight categories, which will be five in 2020. In the world championships last year, the draws of the Olympic weight categories (51kg, 57kg, 60kg, 69kg and 75kg) were more crowded than others," said the former national selector for men, whose first assignment in the top position would be the Strandja Memorial in Bulgaria next month.