The 20-year-old shooter from Tamil Nadu shot gold with 251.7 points, while Seonaid Mcintosh from Great Britain took the silver with 250.6 points. 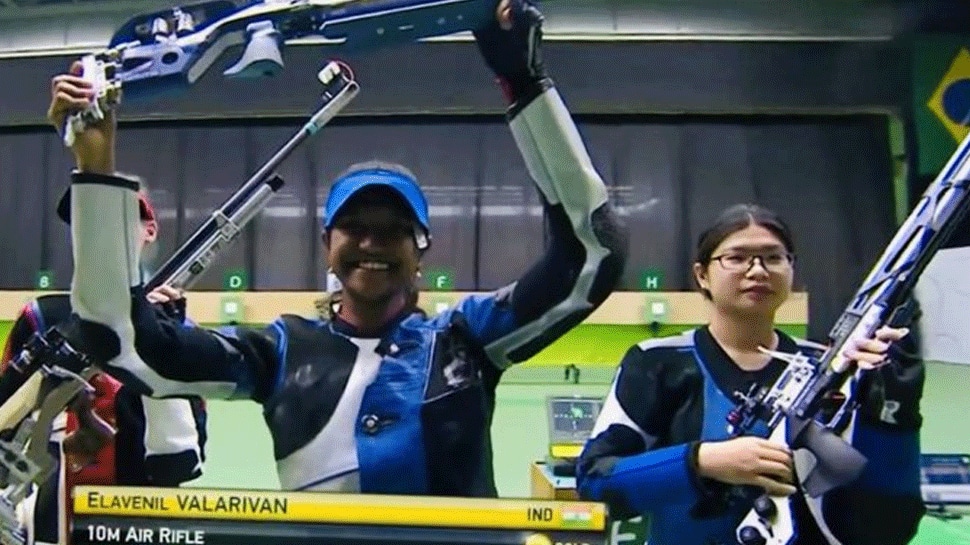 The 20-year-old shooter from Tamil Nadu shot gold with 251.7 points, while Seonaid Mcintosh from Great Britain took the silver with 250.6 points. Ying-Shin Lin from Chinese Taipei won a Bronze medal and the Olympic Quota.

Valarivan had narrowly missed out on a medal at the ISSF World Cup in Munich as she finished fourth in the final. Elavenil surpassed her senior compatriots Anjum Moudgil and Apurvi Chandela to win the Gold at Rio.

World number 2 Anjum Moudgil (166.8 points) came sixth at the event. Earlier, Apurvi Chandela narrowly failed to qualify for the final, finishing at 11th place in the qualifying round. The world number two Anjum has already secured a quota for the 2020 Tokyo Olympics.

The Sports Authority of India (SAI) congratulated Elavenil Valarivan for her achievment.

It’s a wonderful start to the #Shooting WorldCup in Rio as 20yr old #TOPSAthlete @elavalarivan wins a gold in women’s 10m air rifle with a score of 251.7.

Tt’s a 1st ever Sr. WC medal for this talented shooter.
We congratulate her!@KirenRijiju @DGSAI pic.twitter.com/0q3XPlYVyK

Valarivan and Moudgil had qualified for the final with scores of 629.4 and 629.1 respectively. Chandela hit 627.7 after a poor final qualification round, eventually finishing 11th, outside the eight qualification spots.

This is Elavenil Valarivan's maiden medal at senior World Cup. She had earlier won gold medals at ISSF Junior World Cup in Sydney and Suhl in 2018.

The ISSF Rifle/Pistol World Cup which is being held in Rio de Janeiro, Brazil will continue on Thursday with the 50m Rifle 3 Positions Men, 25m Pistol Women and 10m Air Pistol Men Finals.

About 541 athletes from 72 nations are participating in this World Cup. They are competing not only for the medals but for the 16 Quota places for the 2020 Tokyo Olympic Games in each of the 8 individual events.