Murli Sreeshankar's 8.26m jump came in his fifth attempt as he improved his earlier national record of 8.20m which he had registered in 2018. 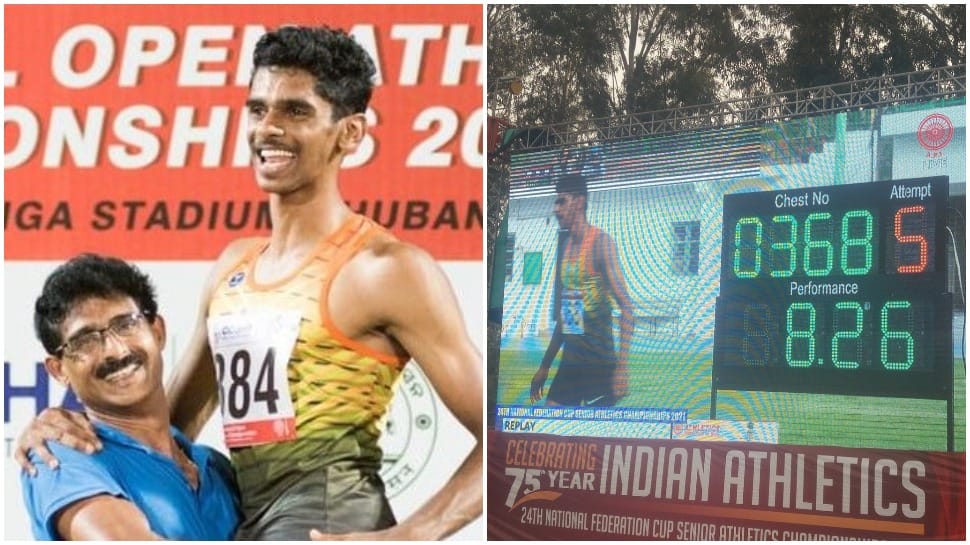 Patiala: Long jumper Murli Sreeshankar on Tuesday qualified for the Tokyo Olympics by bettering his own national record with a leap of 8.26m on the second day of the Federation Cup Senior National Athletics Championships in Patiala. The Olympics qualification mark in men's long jump event is 8.22m.

That's a ticket for #Tokyo2020 for Murli Sreeshankar in that pic.

Hearty Congratulations to Murli Sreeshankar who has qualified for #Tokyo2020 with a national record jump of 8.26m at the Federation Cup. He surpassed his own record of 8.20m and the Olympic qualifying mark of 8.22 meters! pic.twitter.com/sj1pUadlGf

National record holder Dutee Chand was beaten to second place by S Dhanalakshmi, while Hima Das was disqualified after a false start in a much-anticipated women's 100m sprint final in the Federation Cup Senior National Athletics Championships on Tuesday.

The 22-year-old Dhanalakshmi of Tamil Nadu took the gold by clocking 11.39 seconds ahead of Dutee (11.58) of Odisha to become the fastest woman of the championships on the second day of competitions at the NIS Campus. Another Tamil Nadu runner Archana Suseendran was third in 11.76.

This was after Hima, who was running in the shorter sprint races of 100m and 200m instead of her per event 400m, was disqualified after a false start. The much-anticipated final did not live up to the expectations as Hima was shown the red card, while Dutee and Dhanalakshmi did not come anywhere near the Olympic qualification mark of 11.15 seconds.

Dhanalakshmi had qualified for the finals as the fastest runner with a time of 11.38 in the preliminary round on Monday and she did not make any improvement in her timing on Tuesday. The same was in case of Dutee, who had run 11.51 on Monday.

Gurindervir Singh of Punjab won the men's 100m final in 10.32 seconds, while Elakkiyadasan Kannada of Tamil Nadu (10.43) and Maharashtra's Satish Krishnakumar (10.56) were second and third respectively.

National record holder Amiya Kumar Mallick of Odisha finished seventh with a time of 10.75. Gurindervir had clocked a personal best 10.30 seconds in the semifinals on Monday in a third fastest time by an Indian sprinter.