Tiger Woods Master’s triumph (just second tour victory and first Major in eleven years) is surely going to be a legendary story surrounding the golf legend that will now lengthen like the towering pines at Augusta National. 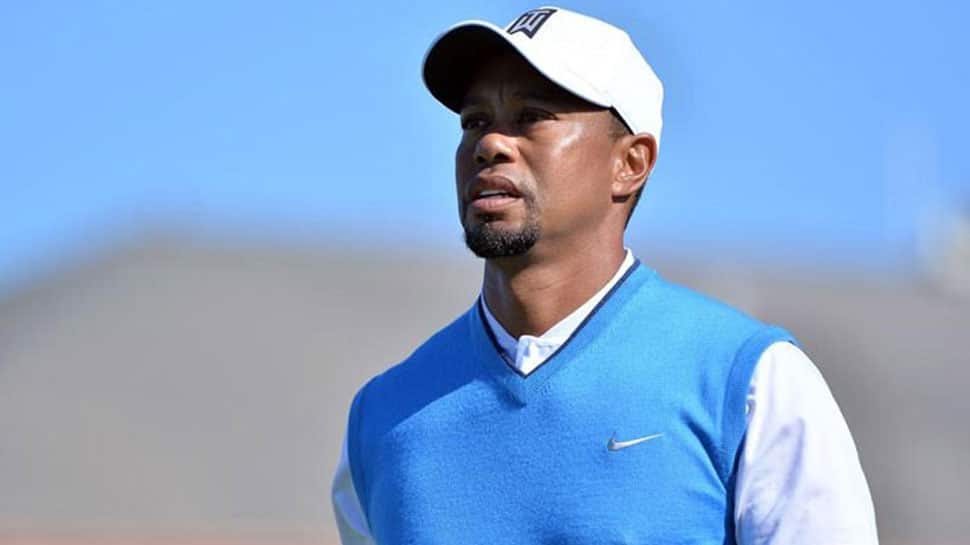 It was like the golfing gods were reclaiming their long lost son that went astray awhile. They sent several hints last year in the British Open and PGA Championships when Tiger Woods sent scares by almost winning.

At Masters this year, as it were, the gathering clouds hinted about the impending storm that would shock everyone.  Lo and behold, there is no greater proof than sending storm warnings so that their ward Tiger Woods could play in the final group as that alone seemed to guarantee a victory. Not earned as right, the Fate put him there almost announcing the impending storm over golf horizons.

The old star finally emerged from a dense dark hole. His shot making style and stoical single minded determination returned. He again becomes the shooting and hopefully would remain a shining star for the rest of his career.

And after, the heavens opened and poured celebrating return of the prodigal son. And also demonstrated the circle of life with Tiger reprising the warm embrace of his father of 1997 by tightly embracing his son Joey in sheer joy. Seems that golfing gods have sent their son as messenger to at least overwhelm the maximum PGA tour triumphs.

Tiger Woods Master’s triumph (just second tour victory and first Major in eleven years) is surely going to be a legendary story surrounding the golf legend that will now lengthen like the towering pines at Augusta National. Literally and figuratively, it is turning back the clock and time; it would go down in history as possibly the ultimate coming from, not behind, but back from the dead story, signifying resurrection and redemption.

It has potential to make him an epitome to be emulated for eternity in professional sport and personal motivation : Tiger’s personal life meltdown in 2008 downed his professional march to golfing greatness and both went off course (  freefall bottomed out at 1199 world ranking) ; frontier technology fusion surgeries on back ( four in three years  created doubted on his comeback to play forget contending( Tiger himself acknowledged this) through missing cuts and retiring mid-match painfully.

His resurrection should inspire Andy Murray no end to similarly resurrect his career as he is struggling with hip surgeries and pain; overcoming mental demons and re-engineering practice regimen and swing ; reminder of legendary unwavering superman focus and steely determination to get the job done in professional field and also now personal field ; ultimate motivation story of never give up attitude even when virtually everyone gave up on him ; winning 81st PGA Tour victory takes him next to equaling Sam Snead’s record of highest number of victories( mimicking similar march of another legend and his friend Federer in tennis) which alone would ensure him status of patron saint of professional golf –even if he misses the record of Jack Nicklaus’s record of most Majors victory;  his own self-belief ( evident in his forcefully slapping his palms) and people’s faith would heighten now.

Metaphorically, the story has all markings and meanings of come back from the dead story; remember those mug shot of startled stare back after his arrest under charge of DIU (mercifully not under alcohol as well as for his vehicle only hitting a small divider and not crashing) and rumours of his death spread worldwide across the worldwide web.

Last year’s Molinari British Open victory exemplified his truly imbibing single-minded focus and stoical equanimity by observing Tiger Woods fifteen years ago at Masters while caddying for brother Eduardo and later competing in the Ryder Cup. Seems like Tiger returned the favour and mimicked by building two stroke cushion in back nine when needed with calmness and complete composure (Molinari had shot 43 consecutive pars in British Open last year).

Tiger learnt and mimicked on final day a lesson from Molinari - of playing safely on par 5s (Molinari was minus 20 for first three days) and being satisfied with birdies. And take how Tiger played percentage shot on par three thirteenth by simply putting ball on the fat of the green when both Molinari and Finau found their balls and dreams buried in the watery grave.

See, the Master remains the ultimate master as Tiger showed better inner calm leaving chasers to collapse collectively. It was a masterclass to Molinari, as course revision, to not forget the basics and not running ahead of oneself. Molinari learnt the calmness well but steely determination is still not at that level.

What is it in 13th par three 150-yard hole that sinks the ambition of likely champions specially when they overwhelm long par fives in most testy conditions? The ghosts returned to haunt again this year. Seems not praying and uttering Amen under breath while crossing Amen corner awakens them- leaving players pursing lips persistently while playing the remaining holes.

Yet again this year, evil spirits that eviscerated Spieth’s charge on 13th returned when leaders Molinari, Finau (including Koepka) found water in most benign conditions and found watery grave that simply buried their ambitions. Both will rue their chances of missing by a whisker for their entire life if they don’t win again. In case that happens, they could draw solace from Scott Hoch missing just 2 feet gimme putt in 1989 Masters and never winning a Major in his life.

Masters again exemplified true golf characteristics that make it a sport with class of its own; for this reason, it continues to win hearts and add adherents worldwide. Consider some: only sport where world number one (Justin Rose) struggled to strike a decent score in ideal/ calm conditions when virtually everyone was posting low numbers. And  defending champ Patrick Reed  couldn’t  challenge anyone except himself and the course ; even Journeyman like  Finau and DeChambeau can threaten to win and overwhelm past and present champions ; two wins and one runner up finish in four Masters ( Jordan Spieth ) doesn’t assure anything as Spieth played like a rank first timer; current crop of Major champions can play inconsistently and try catching up viz. Justin Thomas, Justin Day, Stenson ; old warhorses and seasoned campaigners can play honourably and threaten to disturb the leaderboard applecart viz. Phil Mickelson, Bubba Watson, Adam Scott ; total new names  and wannabes can also  threaten to snatch runaway victory viz. Cantalay ( was cantering to winning post at one stage), Harding , Patton, Kizzire and their victory would be like win of Boris Becker winning Wimbledon in 1985 as a teenager; serious ascending stars can continue the downward slide viz. Hideki Matsuyama ; only power and length ( though both Dustin Johnson and Koepka came runner up but made up only towards last holes) cannot assure success as it was 150 yard par three 13th that felled two leaders ; slow steady tortoise like player can also suddenly become champion -  Xander Shauffele continues to appear to almost win Majors every time  and is fast building Tom Kite type reputation of being in top ten every time in tournaments; one needs all round skills of ball striking, distance, playmaking artistry, touch, putting to put together a round and that extra –you can call golfing gods, luck, roll or anything you like; chipping away in Majors to win like Fowler.

In a way Tiger kept his record half way; not losing while contending in the final group even though not leading in Majors. Maybe, the experience of 14 Majors in always having a frontal view, with no need for rear check out view, helped him plot the plot of outwitting others (he admitted that in post-match interviews).

There was unnecessary spat between Brendon Chamblee and Brooks Koepka over latter losing about twenty pounds and some distance for advertising allure before the Masters. Losing distance didn’t count as he still came runner up. But Koepka wasn’t alone: Patrick Reed, Kevin Kisner, Rory McKILroy, Webb Simpson  et all seemed to have  lost weight. In fact, Webb Simpson and Kevin Kisner seemed split images of each other.

Tigers roars returned reverberating the whole course and may have acted as oars for Tiger’s triumph; they turned so deafening at on 16th   unsettling Koepka as looked askance while standing with ball on tee. Koepka’s realization of two shots Tiger lead  surely may sowed some seeds of doubt on his chances of catching up. Seems witnessing unbelievable spectacle, Masters crowds conveniently forgot the strict code of applauding conduct. Surely, no member would be reprimanded individually of conduct of his/her invitee.

After Oscars’ celebration of diversity, Masters final three-some typified ultimate case of diversity: Though Americans, Tiger Woods is Afro-American-Thai and Tonny Finau is Tonga-Samoan and just imagine how far they are from America; though an Italian national, Molinari completed the ultimate Italian connect with the America.

Masters tournament is still only a Major invitational tournament and not based on qualifying.   Though St. Andrews in Scotland remains the Mecca for golf aficionados, Masters Tournament’s  extra exclusivity elicits all  excitement and awe.

Masters  is like an annual pilgrimage for both players and spectators  and after fourth day, it shuts its doors though this year women Amateur tournament was held for the first time (Augusta opened its doors to women members only in 2012  ). Augusta National still evokes feelings of old world charm through no cell phones, invitation of spectators through members and unwritten code of conduct. The whole year effort is geared to maintain its beauty and splendor.

Next year we all shall wait for Tiger Woods for equaling legend Nicklaus’ record of six Masters victory; he already has top ten out of nineteen finishes in Masters qualifying him as the Master of Masters.

And if he overhauls most Major win record of 18  of Nicklaus along with most PGA tour wins, he would be the ultimate human specimen of man’s march of mind over matter and a Superman- an abiding Western metaphor. It is now likely that he would do so  and is not next to impossible as most came to believe after seeing  his career in last decade.

He has shown beginnings of closing the open field in last few Majors where several contenders contended (on third day ten players had lead at some point) and won. But none dominated like Nicklaus and Tiger did and left the others in field for fend for second spots. For a while Rory promised to do likewise and reaped Nike moolah but has failed to live up to the billings.  Unlike tennis’s big four, golf sees domination by single player like Palmer, Nicklaus and Tiger (Hogan and Sam Snead before).

(Sushil Kumar is a senior bureaucrat and sports lover)