Rosberg, who is also a Laureus ambassador, had announced a shock retirement five days after winning his maiden title in 2016, when he pipped fierce rival and teammate Lewis Hamilton. 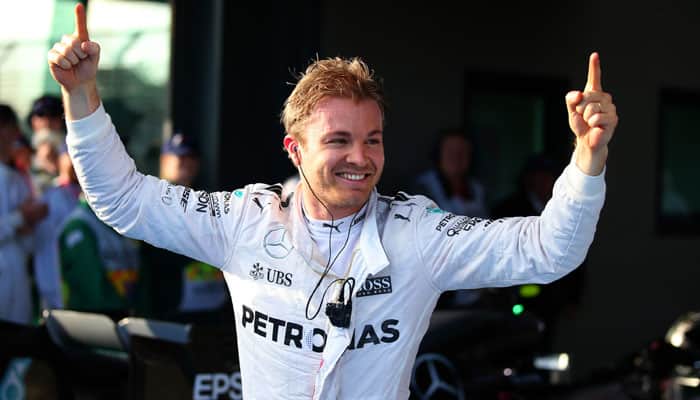 Former world champion Nico Rosberg is "done with driving" but ahead of the 2019 Formula 1 season, the racer in him is most excited about Ferrari fielding two "number one drivers" in Sebastian Vettel and Charles Leclerc for the first time in a decade.

Twenty-one year old Leclerc is being touted as a future world champion after an impressive debut season with Sauber last year. Ferrari had a clear number one and two in Vettel and Kimi Raikkonen for the past four seasons but all of that is set to change with the arrival of Leclerc.

"That's super exciting because he's fast, he's very, very fast (Leclerc). He has everything to be world champion one day, and against Sebastian there, because until now, Sebastian had a clear No. 2 on the team and now that's over," Rosberg told a select group of media ahead of the Laureus World Sports Awards in Monaco.

"Now he really has everything to be No. 1 and that's pretty exciting to watch. Sebastian can't afford to do a season like last year or he'll be beaten by his teammates. He really needs to perform now and that's going to be really, really fun," said the 33-year-old.

Rosberg, who is also a Laureus ambassador, had announced a shock retirement five days after winning his maiden title in 2016, when he pipped fierce rival and teammate Lewis Hamilton.

The German said it will be interesting to see how Ferrari handle Vettel and Leclerc. He also feels Vettel did not seize opportunities in his title fight against Hamilton last year.

"Internally, how Ferrari manage that because for so many years they have had a No. 1 and number two, as long as I can think, yeah. This will be the first time now since ages, I don't even know how long, really ages, that they have two No. 1s. The last time was Kimi against Felipe (Massa) in 2009.

"So, the first time in ages that they have two No. 1s and that's going to be so cool to watch how they manage that internally, and Leclerc, how much respect Leclerc is going to have, it's going to be really fun."

In a wide ranging interaction, Rosberg also spoke about the now-defunct Indian Grand Prix, which ran from 2011 to 2013 before being dropped from the calendar due to financial and tax issues.

While Hamilton created a stir last year by saying that he felt conflicted to race in a "poor place" like India, Rosberg wants Formula 1 return to the country of more than 1.3 billion people.

"Oh, I have great memories (of India). I mean, the track is awesome. I finished on the podium there. I think I finished second in the race behind Vettel in 2013. So I have some lovely memories, and I hope that Formula One can go back there one day. It was a big success at that time and it will be nice to go there again," he told PTI.

Talking more about the upcoming season, Rosberg said the new regulations could lead to the end of Mercedes' dominance in recent years.

"So they have changed the regulations, which should make overtaking better, which is important for the excitement. Those regulations made the cars three seconds per lap slower instantly by changing those regulations," Rosberg said.

"So, it's really a totally different car, and all of the teams have had to redevelop their dynamics in a big way. I think they have caught up about three seconds of performance in their development now since the beginning of last year when the regulations were set," he added.

"So, three seconds of development is huge, and if a team only manages two and a half and the other team manages 3.2 seconds which can easily happen, it can really split things around and suddenly we can see Red Bull leading the way and then Ferrari or Mercedes maybe behind or something," felt Rosberg.

He also reckoned that the new Red Bull-Honda combine could struggle with reliability issues in the first half of the season.

Rosberg gave a practical response when asked about the slow pace of life after being in the fast lane for so long.

"So, actually, this is my strength at the moment, that I'm bringing the fast pace to the business world, which is very slow. It's a huge asset because I'm twice as fast as most others, so it's good to get progress going," added Rosberg, who now keeps himself associated with motorsport through his business ventures.