With Thomas in the clubhouse with a two-stroke lead, Mickelson birdied 15 and 16 to reach 16-under and parred the last two-holes to cap a 66 and force the decider. 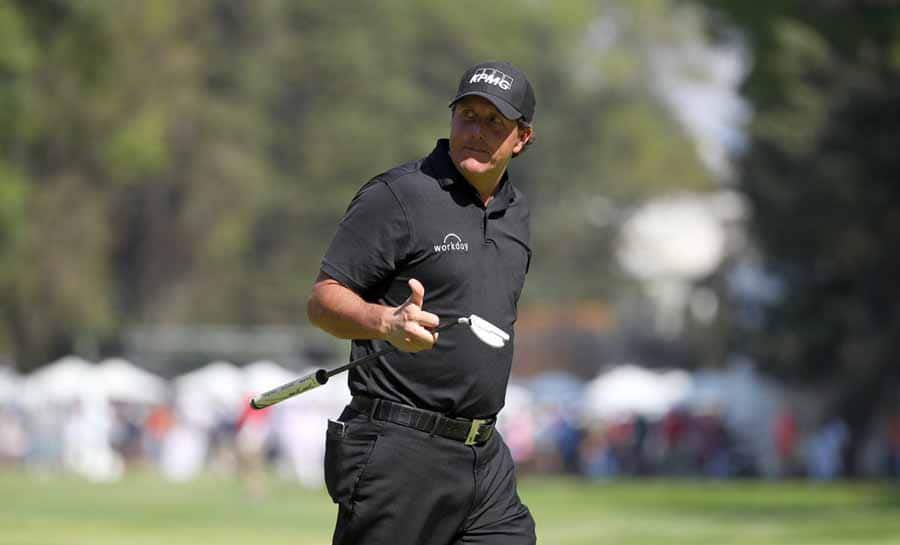 Mexico City: Five-time major winner Phil Mickelson seized his first title in nearly five years on Sunday as he edged Justin Thomas in a playoff to win the WGC Mexico Championship. Mickelson, who hadn`t won since his victory at the Open Championship at Muirfield in 2013, parred the first playoff hole, the par-three 17th at Club de Golf Chapultepec, where Thomas missed the green and was unable to get up and down for par.

"It`s been a tough go the last four years, not playing my best," Mickelson said. "But to have the believe that I was going to get there and finally break through and do it feels incredible. I feel that more is to come," added the 47-year-old. "I`m starting play some of my best golf."

The 24-year-old Thomas, one of the hottest young stars in golf and the reigning US PGA Tour Player of the Year, was coming off a victory at the Honda Classic last week. He made six birdies and holed out from the fairway for an eagle at the 18th for a closing seven-under 64 that put him atop the leaderboard on 16-under 268.

With Thomas in the clubhouse with a two-stroke lead, Mickelson birdied 15 and 16 to reach 16-under and parred the last two-holes to cap a 66 and force the decider. England`s Tyrrell Hatton was 16-under through 17 holes, but bogeyed the last to miss the playoff.

His 67 left him tied for third on 269 with Spain`s Rafa Cabrera Bello (67). Mickelson, whose drought stretched over 101 worldwide starts, had sounded a confident note when he finished the third round two shots off the 54-hole lead of India`s Shubhankar Sharma.

He opened with back-to-back birdies, and after a three-putt bogey at the third birdied the fourth and sixth, adding another birdie at the 10th to hold sole possession of the lead on 15-under. He gave a stroke back at the 11th, however, where his second shot ended up in the undergrowth between ivy-covered trees.When Thomas produced his finishing eagle it looked like, once again, Mickelson would miss out on a trip to the winner`s circle.

But a birdie at the par-five 15th and a birdie at 16 -- where he rolled in a 19-foot putt -- kept his chances alive. "It just validates the hard work I`ve put in and the struggle for the last few years to finally get my game back," Mickelson said.

He admitted he was nervous teeing off in the last group -- but said he welcomed the butterflies. "The thing about it is, I love the challenge," Mickelson said. "To have something like this today makes it all worthwhile."

Although he won last week, Thomas got off to a rocky start at Chapultepec and was even through two rounds. He roared up the leaderboard with a course-record 62 on Saturday. "If you would have told me I would have been in a playoff after two rounds, I would have told you you were lying," said Thomas, whose five wins last season included his first major title at the PGA Championship.

"But I played unbelievable golf these last two days. I`m probably more proud of myself than I`ve ever been. It takes a lot of patience and calmness to stay in it as much as I did." Mickelson was also impressed with Thomas`s weekend.

"If you look at what Justin Thomas did this weekend, shooting 16-under on this golf course over two days -- just incredible," Mickelson said. "I know and respect and admire how great these young players are, and yet I welcome and cherish the opportunity to compete against them."

The unexpected youngster who dominated the headlines on Friday and Saturday, Sharma, just couldn`t maintain his momentum on Sunday. The 21-year-old who had shot to 75th in the world with two European Tour wins this season was trying to win in his first World Golf Championships start. But he closed with a three-over 74 that included five bogeys and just two birdies and left him tied for ninth, six shots adrift.