Riding on a terrific raid performance by Pawan Sehrawat, Bengaluru Bulls beat U Mumba by 30-26 in a Pro Kabaddi League (PKL) season 7 match here on Sunday. 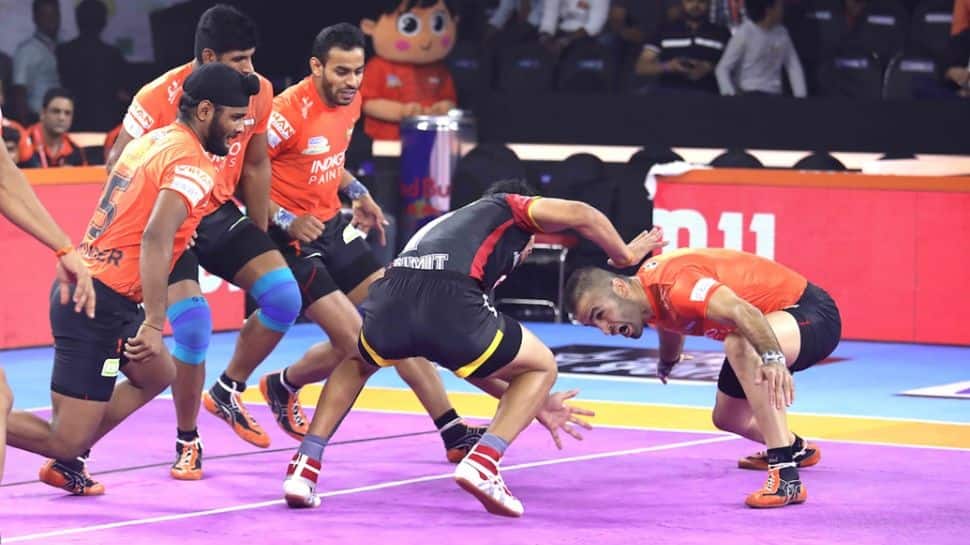 The match was built as the battle between Bengaluru's Sehrawat and U Mumba`s Fazel Atrachali and it was the raider who came out on top.

The home side displayed a strong performance in their home stadium against Puneri Paltan and was more than ready to face Bengaluru, against whom they have their second-best record with 10 victories. However, Sehrawat got a Super 10 and single-handedly flipped the table for Bengaluru as they sneaked their way through victory.

Strong performances by Arjun Deshwal and Atrachali went in vain as some unforced errors towards the end cost them the match.

Meanwhile, Sehrawat got his 300th raid point in the form of a sneaky back kick on Atrachali. The game continued to shift from one team to the other as the first half ended with Bengaluru leading 13-11.

U Mumba carried some momentum in the second half after they got Bengaluru All-Out in the 24th minute to take the lead from Bengaluru to 16-13. Sehrawat made an immediate comeback as he flipped over a diving Sandeep Narwal`s back to cross the mid-line. Sehrawat had to keep his persona at the side as he played cautiously with no help from his fellow raiders, while U Mumba`s Deshwal continued to prove himself as more than just a one-match wonder as he got 6 touch points in a game.

Sehrawat made a strong raid as he got Narwal and danger man Deshwal in his 37th-minute raid to inch closer to U Mumba with the score reading 23-22. It was an unforced error by Rohit Baliyan when he was the last man on the mat for U Mumba as he entered the lobby without a touch which inferred an All-Out on U Mumba.

It was a slim lead but a slender one that led Bengaluru to take over the match with the game ended with the score reading 30-26 in their favour.