Delhi were in the lead for the most part of the match but a late comeback by the Bulls, courtesy Pawan Sehrawat, saw both sides settle for a tie. 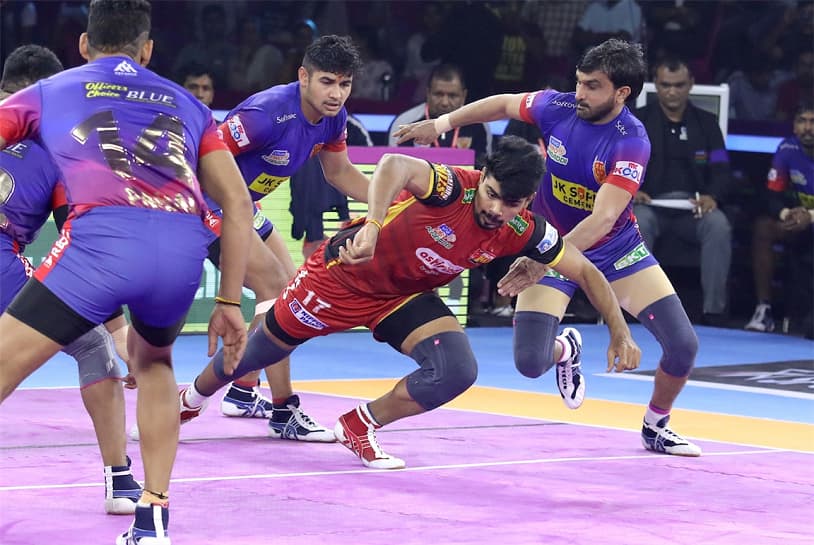 Delhi were in the lead for the most part of the match but a late comeback by the Bulls, courtesy Pawan Sehrawat, saw both sides settle for a tie.

Delhi's Naveen Kumar finished with 14 raid points (his 15th consecutive Super 10) but will rue missing out on a chance to put in a legal raid in the final move of the match to clinch a win for the Delhi, who still remain on top of the table.

The match was billed as the clash of the league's best raiders in Delhi's Naveen Kumar and Pawan Sehrawat of Bulls, but the early minutes proved why both of these raiders were just a significant part of a larger unit in a team sport.

The defence of both teams looked ready for the challenge as both traded blows in the initial minutes. But a slightly more balanced Delhi unit allowed Naveen Kumar more time on the mat with quick revivals and the 19-year-old secured 8 raid points to clinch an All-Out in the last minute of the half to give Delhi the lead.

Rohit Kumar's absence due to an injury played a key role in Bulls' relatively poor showing in raids even though the team benefited heavily when three Delhi defenders were adjudged out of bounds with under 3 minutes left for half time. The first half ended 22-20 with Delhi on top.

Naveen continued his good work in the early minutes of the second half. The 19-year-old raider secured his Super 10 as Delhi inflicted another All-Out on the Bulls in the 9th minute of the second half to move to a 10-point lead.

But the All-Out brought about the revival of Sehrawat on the mat. Bulls' standby captain upped his game and quickly secured an All-Out for the defending champions with under 7 minutes left on the clock.

Both Naveen and Sehrawat were sent to the bench with under three minutes left with the scores tied at 36-36. But Delhi sniffed victory after a tackle and a raid point gave them a two-point cushion going into the final minute.

But a careless tackle by Vishal Mane, followed by Naveen's failure to cross the white line to complete a legal raid, helped Bulls clinch an unlikely tie.

Will not get satisfied unless I clinch gold at Olympics: Boxer Amit Panghal