This is the first time Dabang Delhi has qualified for PKL final. 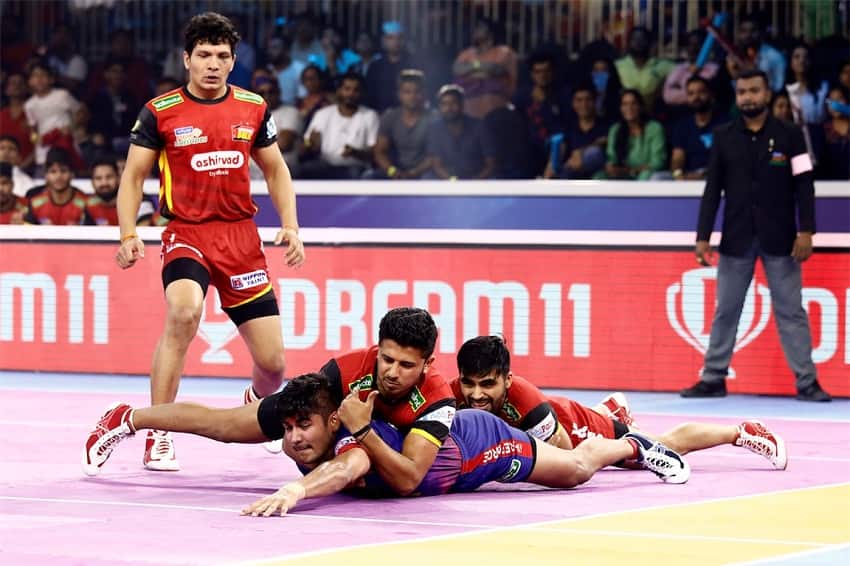 Ahmedabad: Naveen Kumar was the star for Dabang Delhi as they outclassed defending champions Bengaluru Bulls 44-38 on Wednesday to clinch a place in the final of the Pro Kabaddi League (PKL) season seven.

The Delhi team produced an all-round performance, with Naveen impressing with his raids (15 raid points), and Anil Kumar dominating with his tackles (4 points), to win in front of a packed audience at the EKA Arena by TransStadia in Ahmedabad.

This is the first time Dabang Delhi has qualified for PKL final.

The Bulls, just like in the Eliminator against UP Yoddha, had a slow start to the game, with Delhi dominating the first few plays. Ravinder Pahal seemed keen to maintain his dominance in duels against Pawan Sehrawat and started the match with a clean ankle hold of the ‘High flyer'.

Delhi dominated in all departments, with Naveen spearheading the attack, and inflicted the first All-Out of the match in the fifth minute to open up a six-point lead. Pawan secured a three-point Super Raid in the seventh minute to reduce the margin but Delhi maintained their momentum thanks to an unstoppable Naveen. They inflicted another All-Out in the 13th minute to open up an 11-point lead as Naveen secured another Super 10 (his 20th consecutive).

Naveen did make a rookie error as he failed to complete a raid on time which gave Bulls some hope going into the break. Delhi led Bulls 26-18 at half time.

Bulls opted for a more aggressive approach in the second half with the defenders consistently getting the better of the Delhi raiders in do-or-die situations. But what made Delhi a complete unit was the presence of versatile, all-rounders and the likes of Chandran Ranjit and Vijay stepped up with valuable raid and tackle points to always maintain a healthy lead of six or seven points.

Pawan completed his Super 10 but Delhi tackled him successfully on a consistent basis to not let him make a comeback. Delhi were aware of what Pawan could do on the mat and were keen on keeping the league's best raider in the dugout as much as possible.

Bulls' star raider spent more than 20 minutes away from the mat as they struggled to reduce Delhi's lead. At the other end, Delhi ensured Naveen spent very little time on the bench, and that helped them make another All-Out with three minutes in the match to open up a nine-point lead.

Despite Pawan's attempts in the last few minutes, the Delhi defenders held firm to clinch a berth in the grand finale on Saturday.