While both the sides collected 17 raid points apiece, it was Gujarat's defence which made the difference as they contributed with 17 points while Bengaluru could only manage 6. 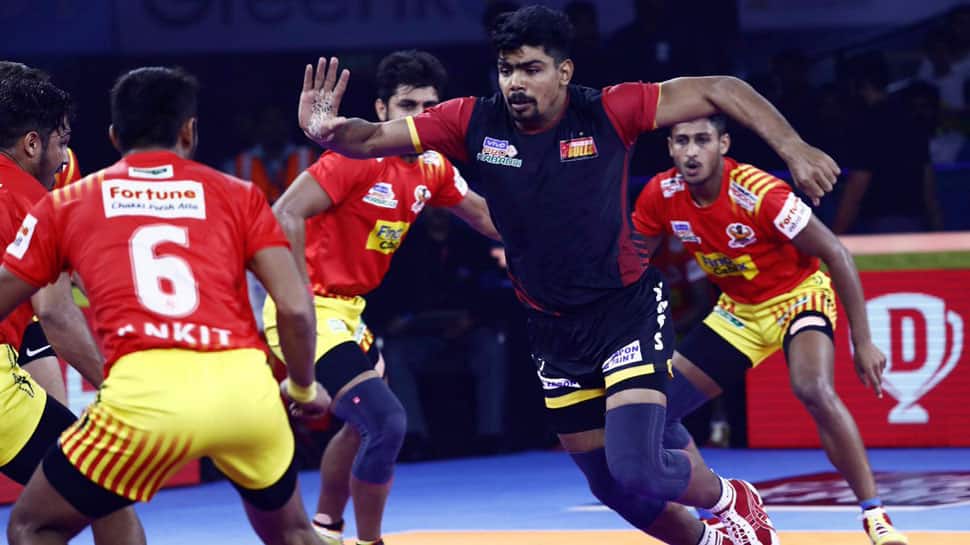 Gujarat Fortune Giants avenged their loss in last year's final against Bengaluru Bulls in style as they hammered the Rohit Kumar-led side 42-24 in their opening match of the Pro Kabaddi League Season 7 on Sunday.

While both the sides collected 17 raid points apiece, it was Gujarat's defence which made the difference as they contributed with 17 points while Bengaluru could only manage 6.

For Gujarat, raiders Sachin, Sunil Kumar and GB More collected 7, 6 and 6 points, respectively, while Sumit, Sonu and Rohit Gulia chipped in with 4, 5 and 2 points, respectively. Pawan Sehrawat fetched 8 points for Bengaluru while their ace raider and skipper Rohit Kumar failed to replicate his last year's show as he could only manage 4 points throughout the match.

Gujarat started the contest on a brilliant note as raiders Sachin and Sumit struck early to hand their team a 3-0 lead in the initial few minutes. Rohit Kumar also failed in a do-or-die raid but collected a bonus point to open his side's account.

The defending champions then made a super tackle against Rohit Gulia to make it 3-4 before Pawan successfully raided to level the score 4-4. Sachin kept on winning points while his side kept tackling the Bengaluru raiders as Gujarat took a 8-5 lead before inflicting an all-out to reach 11 points.

Rohit Kumar and Pawan showed some fight but could find little success as Bengaluru slowly cut the deficit to 8-12 but Sachin and Rohit Gulia kept their good run going as Gujarat raced to a massive 16-8 lead.

Rohit Gulia's stunning raid made the issue 17-8, leaving Bengaluru with just a player on the mat before his side inflicted the second all out to make it 20-10 in their favour.

Gujarat ended the first half with a good 21-10 lead. The second half also had the same story as Bengaluru's ace raiders and defenders kept on faltering while Sachin and Rohit Gulia kept on making successful attempts as Gujarat took a 24-13 lead.

Pawan then made a stunning four-point raid in the 32nd minute as he not only collected a bonus (1 point) but also sent out three Gujarat players.

However, after that Pawan and Rohit Kumar didn't taste much success while the Gujarat side shows brilliance in every department of the game as the score read 29-20 in their favour. Gujarat's Sonu also stepped up to make a super raid as his side took an unassailable 32-20 lead.

Five minutes later, Gujarat inflicted the third all out, worsening Bengaluru's situation, who were tottering at just 21 points while their opposition moved to 36 points. In the last few minutes, Bengaluru tried their best but it wasn't enough as Gujarat outclassed them to register a thumping 42-24 victory.