Rohit Gulia's Super 10 (10 raid points) turned out to be the gamechanger as Pardeep Narwal's early raiding runs in the game went futile. 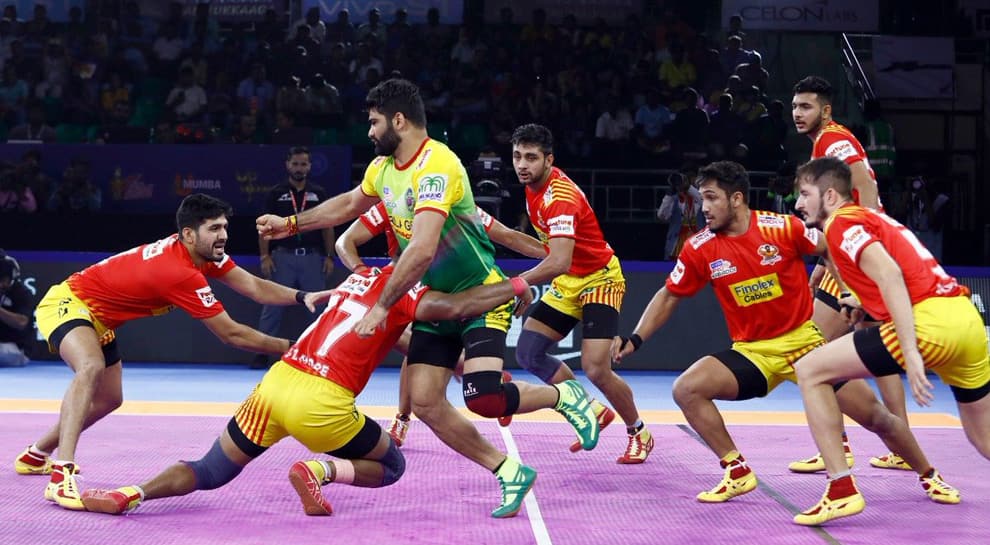 Gujarat Fortunegiants put a full stop to their six-match losing streak in the Pro Kabaddi League Season 7 as they pipped Patna Pirates to register a 29-26 win at the Jawaharlal Nehru Indoor Stadium on Friday.

Rohit Gulia's Super 10 (10 raid points) turned out to be the gamechanger as Pardeep Narwal's early raiding runs in the game went futile. The match began on a feisty note as Pardeep Narwal took out Ruturaj Koravi in the opening raid of the game before Gujarat Fortunegiants' Rohit Gulia responded with a two-point raid.

However, Patna Pirates caught the game by the scruff of the neck when Pardeep lived up to his moniker of the 'dubki king' to do a three-point super raid. The fans had to wait till the sixth minute of the game to see the first tackle point when Jaideep tackled Sonu.

Patna Pirates continued riding on the momentum they gathered to inflict an All-Out in the next minute as the scoreline read 10-3. Gujarat Fortunegiants slowly crawled into the game thereafter courtesy of their resolute defence and silly errors from the opposition.

The margin got reduced considerably as Patna Pirates only had a four-point lead in the half-time. As the game resumed play, Gujarat Fortunegiants completed their comeback when they inflicted an All-Out to find themselves having the lead. GB More extended it further when he got Mohammad Maghsoudlou and Neeraj Kumar in a single raid.

Patna Pirates, however, refused to throw the towel as a Super Raid from Monu and subsequent successful tackles from Hadi Oshtorak meant the game became all square at 22-all.

But, an official timeout broke their rhythm as Pardeep got tackled in the first raid after it. Rohit Gulia's two-point raid later saw Gujarat Fortunegiants having a three-point lead as they looked to close out the match by winding down the clock.

In the final minute of the match, Patna Pirates' Mohammad Maghsoudlou raided Parvesh Bhainswal but it proved to be too little too late as Gujarat Fortunegiants won the tie.