Vikas Kandola (8 points), Prashanth Kumar Rai (8 points) and Ravi Kumar with a High 5 (6 tackle points) led an all-round show by the Steelers which saw the Haryana side jump to the third spot in the points table. 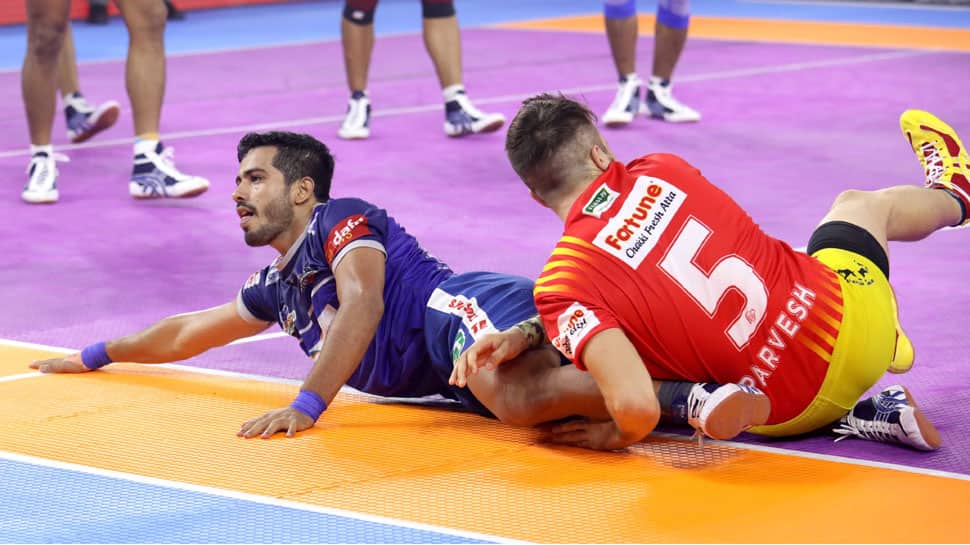 Vikas Kandola (8 points), Prashanth Kumar Rai (8 points) and Ravi Kumar with a High 5 (6 tackle points) led an all-round show by the Steelers which saw the Haryana side jump to the third spot in the points table.

In-form Steelers, who had lost just one out of their five matches this season, started on the front foot with their raider Kandola once again in the thick of the action. The Fortunegiants defence, despite having the best tackle success rate this season, struggled to contain the Steelers' raiding unit.

Sunil Kumar and Parvesh Bhainswal both struggled to contain Kandola, as the raider inflicted the first All-Out on Fortunegiants with a 3-point raid in the 15th minute. Ruturaj Koravi successfully tackled Kandola twice in the latter stages but Steelers' raider Vinay and Prashanth Kumar Rai quickly revived their star to close the first half with a 20-11 lead.

While the raiders usually walk away with all the credit for the Steelers, their defence has been more than influential in their winning streak. The likes of Ravi Kumar and Vikas Kale were in form again, dominating the early exchanges in the second half, which led to another All-Out for the Fortunegiants in the fifth minute of the half.

The Fortunegiants struggled to keep Kandola in the bench despite a few successful tackles because Vinay and Prashanth were having an equally good game. Vinay's 3-point raid with eight minutes remaining on the clock forced another All-Out on a hapless Fortunegiants as Steelers cruised to a 21-point lead.

The Steelers chose to experiment in the final stages of the match by giving rest to Kandola and even gave away an All-Out.