Pawan Sehrawat was once again the hero for Bengaluru Bulls as they beat home team Haryana Steelers 56-39 in a highly entertaining Pro Kabaddi League match at the Tau Devilal Sports Complex here on Wednesday. 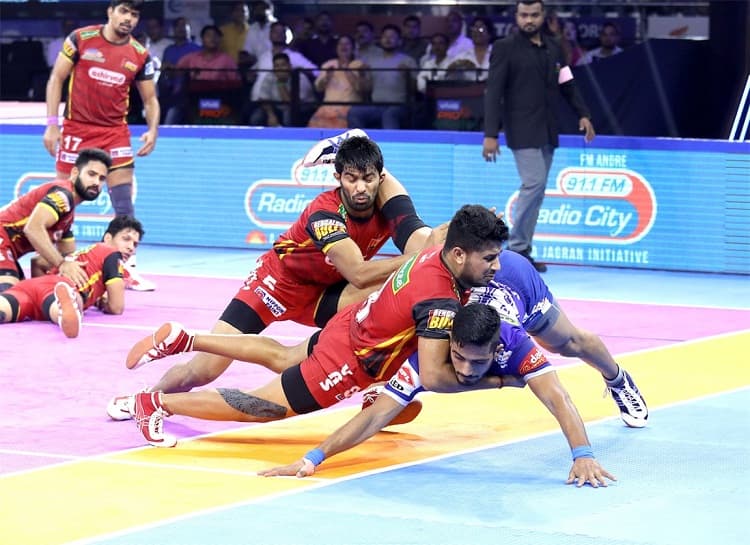 Panchkula: Pawan Sehrawat was once again the hero for Bengaluru Bulls as they beat home team Haryana Steelers 56-39 in a highly entertaining Pro Kabaddi League match at the Tau Devilal Sports Complex here on Wednesday.

The raider scored a record-shattering 39 points (breaking Pardeep Narwal's previous record of 34 raid points in a match), three more than what the entire Steelers managed, as the defending champions secured a place in the season seven play-offs with the result.

The half began with Bengaluru looking sharp but a series of clever raids by Haryana's Prashanth Kumar Rai meant the home team took control of the match. Vikas Kandola, playing in front of his home crowd, was instrumental in helping Haryana clinch an All-Out in the 8th minute of the match.

But with the All-Out ended Haryana's dominance as Sehrawat invoked his best to single-handedly change the tie in Bengaluru' favour. His jump over a defensive chain in the 9th minute set the tone for a first-half blitzkrieg, reminiscent of his heroics in Season 6 finals, that saw the defending champions inflict two All-Outs (12th minute and 18th minute of the first half) on Haryana.

Sehrawat scored 18 raid points in the first half as Bengaluru came back from trailing by 6 points to lead the match by 10 points at half-time (28-18). He continued his outstanding work in the second half, cruising to 26 raid points by the 10th minute of the second half.

Unfortunately for him, Bengaluru's defence was having an off-day which meant Rai and Kandola kept picking up points for Haryana to stay in the match. Rai picked his Super 10 but there was no stopping Sehrawat as he helped Bengaluru secure another All-Out with seven minutes remaining to open up an incredible 14-point lead.

Bengaluru hit the 50-point mark with four minutes left in the game as the defence also took encouragement from Sehrawat's game to start influencing the match. The deflated Haryana team couldn't find a way back as Sehrawat broke Narwal's record of 34 raid points in a match with 4 minutes still left in the game. Bengaluru got another All-Out with under two minutes left as they wrapped up a victory.

Incredibly, Sehrawat finished the match on 39 points and was the only raider who scored points for Bengaluru in what will for years be considered amongst the best raiding performances of all times.

With Bengaluru securing a spot in the playoff, the last spot will now be closely fought between UP Yoddha and Telugu Titans.