Titans were led by a commanding Vishal Bhardwaj High 5 while Siddharth Desai picked up 7 raid points. 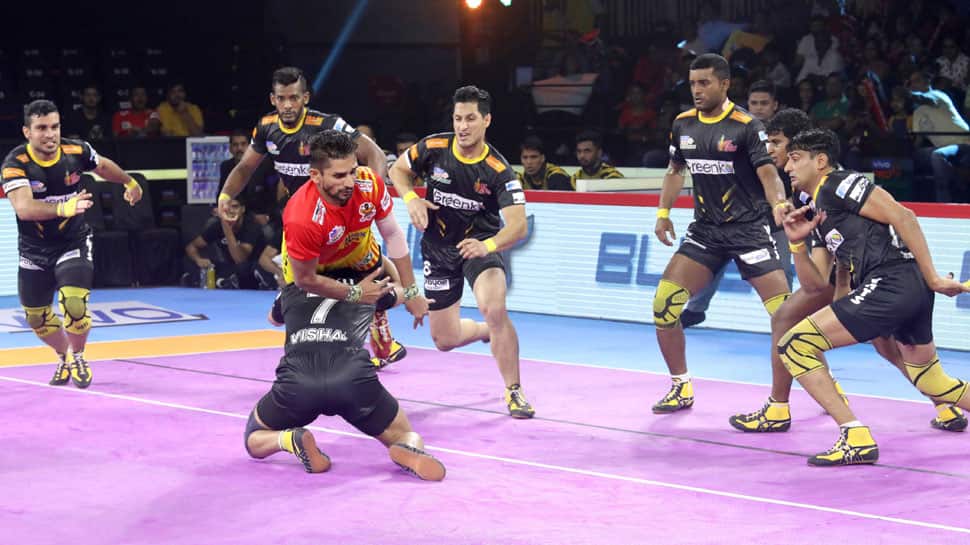 Telugu Titans notched up their first victory of Pro Kabaddi League (PKL) Season 7 as they defeated Gujarat Fortunegiants 30-24 at the EKA Arena on Sunday.

Titans were led by a commanding Vishal Bhardwaj High 5 while Siddharth Desai picked up 7 raid points. However, it was the 16 tackle points performance by the Titans defence that ultimately guided them to their first victory.

The Desai brothers -- Siddharth and Suraj -- started off with successful raids to get the Titans off to a good start. Amit Kumar then stepped up as the third raider to send Fortunegiants' primary raider Sachin to the bench.

The visitors managed to reduce Fortunegiants to two men in the first seven minutes and two raids later, inflicted their first All-Out of this season to take a 9-4 lead.

Fortunegiants scored their first tackle point of the night towards the end of the first quarter through Parvesh Bhainswal. But Titans tackled down Sachin and GB More in quick succession to hold on to their advantage.

Desai then put in three successful raids in a row as Fortunegiants answered by tackling Amit Kumar, before More scored the final point of the half with a touch on C. Arun, as the teams went into the break with Titans leading 17-13.

More was sent to the bench by Vishal early in the second period. However, it did not take the Fortunegiants very long to open their account through a successful Rohit Gulia raid.

Defenders Bhainswal and Vishal then took control of the match and brought up their High 5s in quick succession as the match stayed close.

Titans captain Abozar Mohajermighani then stepped up at a vital time for his team, first sending back Fortunegiants' most successful raider of the season Gulia and then taking down More to swell the visitors' lead to six points.

Bhainswal, though, stood strong for Fortunegiants and picked up Suraj twice in Do-or-Die raids to keep the score difference in check. Armaan then came in with just over a minute left in the contest and was tackled down. But Ankit, who had stepped out of bounds, was involved in the tackle, giving the point to Titans.

The six-point gap remained till the end of the match as Titans went on to claim their first PKL victory over Fortunegiants with a 30-24 verdict.

Indian spikers settle for silver in U-23 Asian Championship