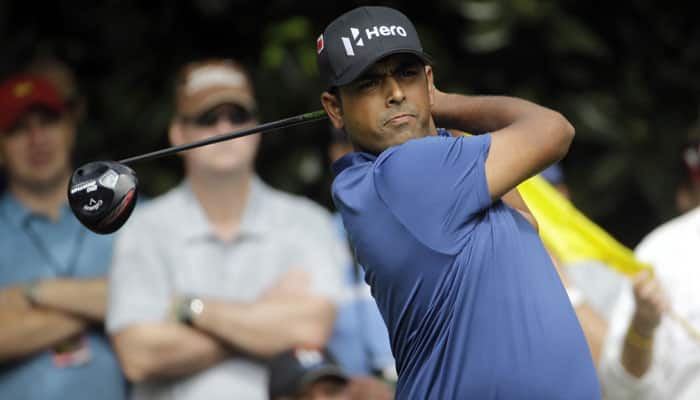 India's Anirban Lahiri made his first cut at the Players Championship on his fourth attempt and was placed tied 39th at the midway stage of the flagship event of the PGA Tour.

He had missed the cut on three previous attempts, so it was a relief after making it to the weekend. A year earlier, he seemed all set for the weekend action before a disastrous back nine dashed those hopes.

He will play his third round with Patton Kizzire (71-70).

Lahiri said, "It was kind of a weird day. I came in for that final four-footer and there were no accidents. So, that sealed a two-under 70 and I was tied-35th for the round. In the second round, my play was definitely better, as I hit the ball better than yesterday but I didn't convert the opportunities that I got."

"I think I didn't play that well on the par 5s. I birdied two of the four Par-5s on the first day and I managed only one today. Worse, I gave away a bogey on Par-5 11th, which I had birdied a day earlier."

"Still it was good to get one thing done, which is getting into the weekend after last year's debacle on the back nine," he added.

Tiger Woods, who put two balls into the water at the 17th for his first-ever quadruple bogey on the hole in 69 rounds, still made the cut at three-under with rounds of 70 and 71 to be tied 39th.

There was a European one-two at the top of the leaderboard as Rory McIlroy (67-65) roared into action with an eagle and a bogey on 16th and 17th to join Tommy Fleetwood (65-67).

They were 12-under and three shots clear of yet another European star, Ian Poulter, who shot 66 despite a bogey finish at the ninth, his closing hole. Poulter shared the third spot with US Ryder Cup captain Jim Furyk (64), who shot his career-best score at the TPC Sawgrass.

Furyk got to know that he was into the field only on Sunday. The third player at tied third was Mexican Abraham Ancer (69-66).

No player from England, Northern Ireland or Mexico has ever won the Players Championships.

While Lahiri made the cut comfortably, Kiradech, Asian Tour's other flag bearer, restored his pride with a 69 after his first round 84, but he missed the cut.

The cut fell at one-under and 80 players made the cut. Making the cut on the line were the stars including Brooks Koepka, Louis Oosthuizen, Justin Thomas and Bubba Watson.

Hurts to think about the pain that Kelly Caitlin must have been hiding: British cyclist Katie Archibald