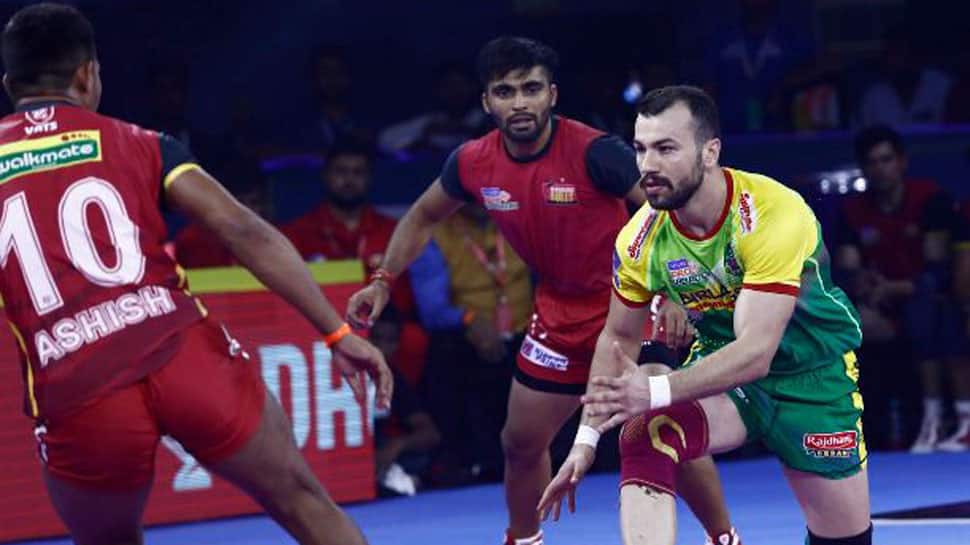 Defending champions Bengaluru Bulls made a stunning comeback to pip Patna Pirates 34-32 in their campaign opener of the Pro Kabaddi League (PKL) Season 7.

Bengaluru forced multiple super tackles to begin their campaign with a win.

In the first few minutes of the match, it was all Bengaluru as captain Rohit Kumar scored consecutive raid points to give his team a 5-1 lead, even as Maghsoudlou put in a tremendous super tackle to revive Patna.

Patna's famed "record breaker" raider Narwal got going as he scored his first raid point in the ninth minute.

On the other hand, Bengaluru high-flier Sehrawat had a quiet beginning to the match as Patna's defence did a fine job on him.

Patna led 9-7 after 12 minutes when Bengaluru put in a super tackle through Sangwan to show their brute strength.

In the 16th minute, Patna inflicted the first all out of the match to lead 14-11. At the end of the first half, they held a slender four-point advantage to lead 17-13.

Bengaluru's defence showed their mental and physical toughness in the second half as they piled on super tackles to make a comeback in the match. Sangwan and Sheoran marshalled the defence brilliantly and in the 32nd minute, they only trailed 23-24.

In the 34th minute, Bengaluru inflicted an all-out to lead 30-26 and Patna were staring at a defeat in their first encounter of the season.

Bengaluru showed tremendous teamwork in the 37th minute to send Narwal to the bench to lead 32-27.

Maghsoudlou made two quick raid points in a minute as Patna trailed 30-33 in the 39th minute, while Narwal attained a super 10 but it wasn't enough as Patna crashed to a defeat in their first match of the season.