Bengal will now face Delhi in the summit clash on Saturday at the same venue. 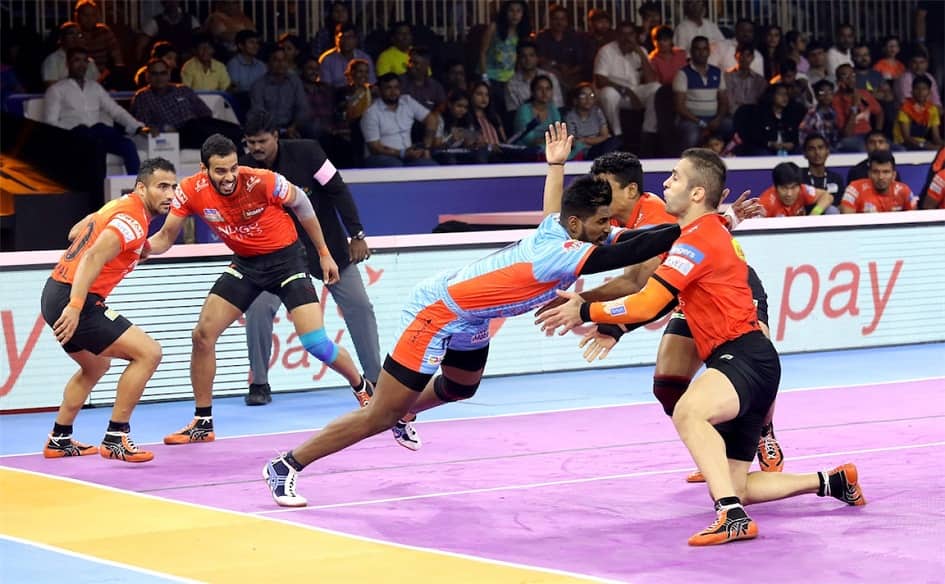 Ahmedabad: Bengal Warriors registered a narrow 37-35 victory over U Mumba in a tightly-fought contest to clinch a place in Pro Kabaddi League (PKL) season seven finals. The victory on Wednesday, in front of a packed audience at the EKA Arena by TransStadia here, set up a grand finale date against Dabang Delhi.

This is the first time both teams have reached the finals of the league.

Lead raider for Bengal, Maninder Singh, was unfortunately not part of the match-day squad as he failed to recover from a shoulder injury sustained in a league match against Delhi, who secured a spot in the final earlier in the day.

But Bengal matched the in-form U Mumba side in the early exchanges, with Sukesh Hegde looking composed in his raids. Rinku Narwal in the left corner was also having a good day for Bengal who were helped by some uncharacteristic errors in the Mumbai defence. A two-point raid by Hegde for Bengal in the 12th minute, pushing away U Mumba skipper and ace defender Fazel Atrachali in his way back to the halfway line set the tone for his team who inflicted an All-Out with 5 minutes remaining to open a 4-point lead.

The All-Out gave the Bengal time the confidence they needed and they improved the lead to 6 (18-12) at the end of the half.

Bengal made the mistake of slowing the pace of the match in the early minutes of the second-half that allowed U Mumba to reduce the points gap a little but Hegde produced a stellar 4-point Super Raid in the 8th minute to deflate U Mumba's confidence.

Bengal pressed home the advantage to clinch another All-Out in the 10th minute of the half to open up a 10 point gap.

Despite U Mumba's best efforts, they could not bring down Bengal's lead as the match moved to the final minutes with Bengal well in control. But Ajinkya Kapre had other plans as he produced a 4-point Super Raid with five minutes remaining to change the momentum.

U Mumba went on to clinch an All-Out with three minutes remaining to make it a one-point game. Sandeep Narwal's block with under two minutes remaining made it 35-35. Arjun Deshwal failed in a bonus point attempt in his team's penultimate raid and Bengal floored the raider in the final move of the game to clinch the match.

Bengal will now face Delhi in the summit clash on Saturday at the same venue.