Haryana had lost to Mumbai Garudas -- now renamed as Mumbai Maharathi -- in the final of the inaugural PWL last year. 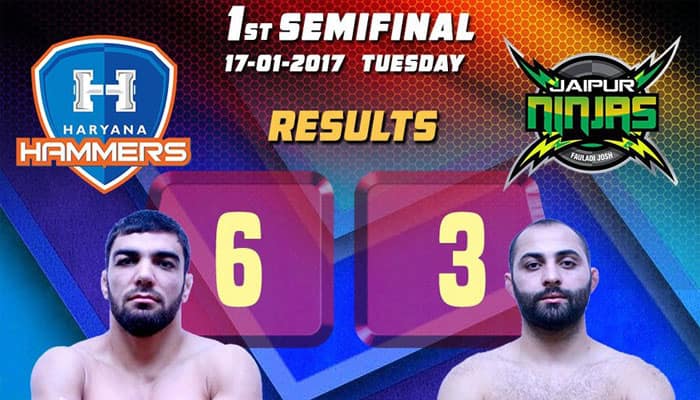 New Delhi: Haryana Hammers entered the Pro Wrestling League (PWL) final for the second consecutive year with a comfortable 6-3 win over Jaipur Ninjas in their semi-final contest at the KD Jadhav Indoor Stadium here on Tuesday.

Haryana, who had lost to Mumbai Garudas -- now renamed as Mumbai Maharathi -- in the final of the inaugural PWL last year, registered a splendid comeback after conceding a 0-2 deficit in the early stages.

They will meet the winner of Wednesday`s second semi-final between defending champions Mumbai and Punjab Royals in the title clash.

Jaipur took the early lead when Jakob Makarashvili registered a comfortable 10-0 win over Sumit Sehrawat of Haryana in the men`s 74kg category.

The 2016 World Cup bronze medallist from Georgia was far too superior in terms of technique and experience and hardly allowed Sumit a chance to score.

Magomed Kurbanaliev kick-started Haryana`s comeback with a hard fought 5-0 verdict over Vinod Kumar of Jaipur in the men`s 70kg division.

The bout was a bitterly contested affair till the very end with Vinod giving a very good account of himself against the reigning world champion.

He conceded a single point in the first round thanks to the passivity rule and troubled his opponent till the final 30 seconds when he erred while attempting a takedown and Magomed pulled off a successful counter-attack to seal the issue.

Haryana then took the lead through Rajneesh who fought off a strong challenge from Jaipur`s Rahul Mann to register a hard-earned 8-6 win in the men`s 65kg category.

Rajneesh grabbed the early advantage, opening up a sizeable 6-0 lead before the opening two minutes were up. The second round saw some exciting, fast paced action as Rahul fought back to go within touching distance of a win. But the Haryana grappler held on for the win.

Sandeep Tomar wrested a dramatic 5-4 win over Jaipur`s Utkarsh Kale in the men`s 57kg division to hand the advantage back to Haryana.

Trailing 3-0 with around a minute to go, Kale bagged four points with a takedown and rollover. But with just three seconds to go, Tomar pulled off a takedown to take two points and clinch the nail biting contest.

Swedish star Sofia Mattsson clinched the contest for Haryana when she defeated Jaipur`s Betzabeth Arguello by fall in the women`s 53kg contest.

The 2016 Olympics bronze medallist and current European champion dominated her Venezuelan opponent right from the start and was leading 8-0 in the second when she managed to pull off the pin.

Abdusalam Gadisov ended the proceedings in style for Haryana with a hard-fought 5-4 win over Jaipur`s Georgian powerhouse Elizbar Olikadze in the men`s 97kg category.

Gadisov executed a takedown and rollover to enjoy a 4-0 lead at the break. But with less than a minute remaining in the contest, Olikadze came up with a four-point move to level things up.

But the Georgian turned a tad defensive in the final 30 seconds which prompted the judges to award a penalty point to Gadisov.

What wrong did Zaira Wasim do? Mohammad Kaif asks those trolling Dangal star