Amit Dhankar conjured up a decisive win under pressure against Haryana Hammers' Praveen Rana to steer Punjab Royals to the semifinals of the Pro Wrestling League (PWL) on Saturday. 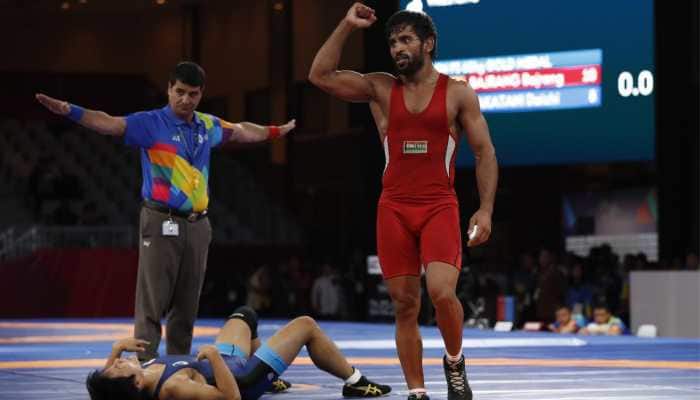 Amit Dhankar conjured up a decisive win under pressure against Haryana Hammers' Praveen Rana to steer Punjab Royals to the semifinals of the Pro Wrestling League (PWL) on Saturday.

The tie was locked 3-3 when Dhankar and Rana took the mat, their teams' fortunes depending on them and eventually it was the Punjab wrestler who delivered in the men's 74kg category.

Earlier, the new find of PWL-4 in the men's section Ravi Kumar of Hammers defeated Nitin Rathi of Punjab 9-2 in the men's 57kg category.

Padamshree and world championships silver medallist Bajrang Punia did not let the advantage slip, getting the better of compatriot Rajneesh 6-2 in the men's 65kg category.

World junior champion Anastasia Nichita got the Hammers back with a massive 13-0 win over the European Championships silver medallist Mimi Hristova in a completely one-sided encounter filled with takedown, near fall and leg-rolls.

Both teams were tied 2-2 after the fourth bout of the evening.

Dato was trailing 2-4 midway through the second round but a near pin fall gave Dato a 7-4 win and the defending champions Punjab Royals the edge going into the next two bouts.

Anju, 19, of Punjab Royals showed lot of promise early in the bout but the experienced 2017 Commonwealth Championships gold medal winner Seema kept the younger wrestler at bay and won the bout 8-2 to push it to the decider.

Padma Honours: Gautam Gambhir wants to be a better 'human being'