Ichiro, 45, made the announcement after playing for the Mariners in the second game of their Major League Baseball opening series in Japan against the Oakland Athletics. 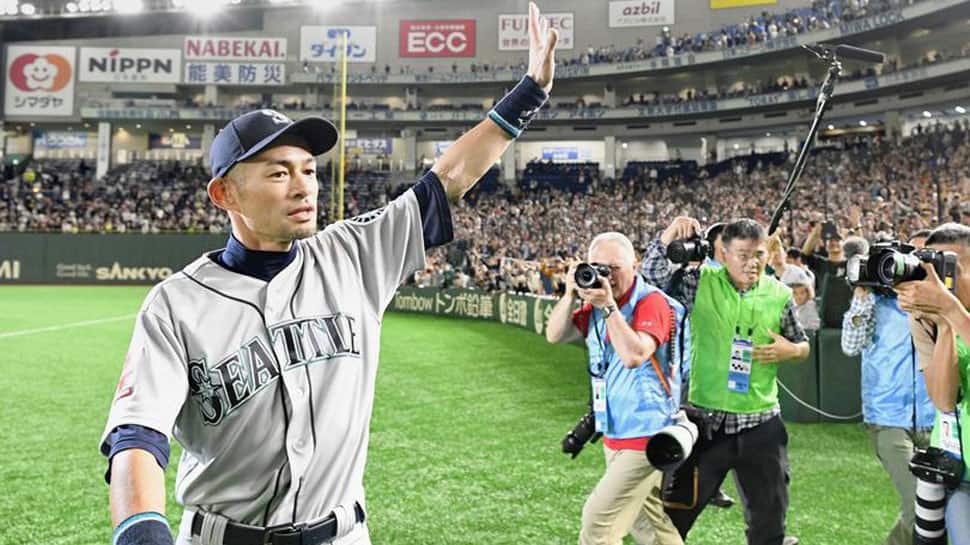 Ichiro Suzuki, the most prolific hitter in baseball history and an icon on both sides of the Pacific, retired on Thursday as his fellow Seattle Mariners wept, bowed and hugged him in a Tokyo stadium rocking with cheers.

Ichiro, 45, made the announcement after playing for the Mariners in the second game of their Major League Baseball opening series in Japan against the Oakland Athletics.

His final could hardly have been more typical - a ground ball out that he very nearly legged into an infield single with a full-bore sprint to first. The Mariners won 5-4 after three extra innings.

The two games this year mark Ichiro`s 28th season as a top tier professional baseball player in the United States and Japan.

"I have achieved so many of my dreams in baseball, both in my career in Japan and, since 2001, in Major League Baseball," Ichiro said.

"I am honoured to end my big league career where it started, with Seattle, and think it is fitting that my last games as a professional were played in my home country of Japan."

Ichiro, who started in right field in both games for the Mariners this week, has 3,089 hits in the U.S. major leagues and 1,278 in Nippon Professional Baseball. His 4,367 hits are the most ever at the top professional level.

The 10-times All-Star also set MLB`s record for hits in a single season with 262 in 2004, but he remained humble to the end.

"I do not know well whether it is success, I can not judge that at all. So I hate the word success," Ichiro told reporters.

"I think that it takes great courage to go and challenge in the MLB," he continued, directing his message to young aspiring Japanese players.

Ichiro took Japan by storm early in his career, winning seven consecutive batting titles with the Orix BlueWave before moving to the United States in 2001.

Ichiro hit the ground running immediately in the MLB, winning the American League MVP in his first year. At a time of usually powerful and beefy sluggers, he was the opposite - wiry, skinny and perpetually in motion, always seeming to be two steps towards first base at the moment the ball left his bat.

He played the majority of career for the Seattle Mariners, and also had late-career stints with the New York Yankees and Miami Marlins.

He is expected to continue to work with the Mariners, having started a new role as "special assistant to the chairman" last year.

Ichiro was given a hero`s send-off in a packed Tokyo Dome at the end of his final game and his teammates met him outside the dugout to pay tribute.

The man many see as taking over the mantle for Ichiro in Seattle, compatriot Yusei Kikuchi who pitched his MLB debut on Thursday, was particularly moved.

Kikuchi, who moved to the MLB before this season, bowed to Ichiro before weeping as he buried his face in the 45-year-old`s shoulder.

Few players have had such an impact on the sport and Ichiro is the most successful player to feature on both sides of the Pacific.

His personality and popularity transcended sport.

"I don’t think it is an understatement to say that Ichiro has had a bigger impact on the way Americans view Japan that really any other single person," Jim Small, the MLB international vice-president, told Reuters before Ichiro`s announcement.

"He is just such a great player, who carries himself with a lot of class and a lot of cool factor. I think that sets him apart," Small added.

"I think people in America saw what people in Japan saw; this is a cool dude who is an absolutely phenomenal baseball player.”