The Hobart-born 19-year-old hit a `sausage` kerb at Parabolica and his Campos Racing car was flung high into the air before flipping and landing upside down on the tyre wall, coming to rest against the wire fence. 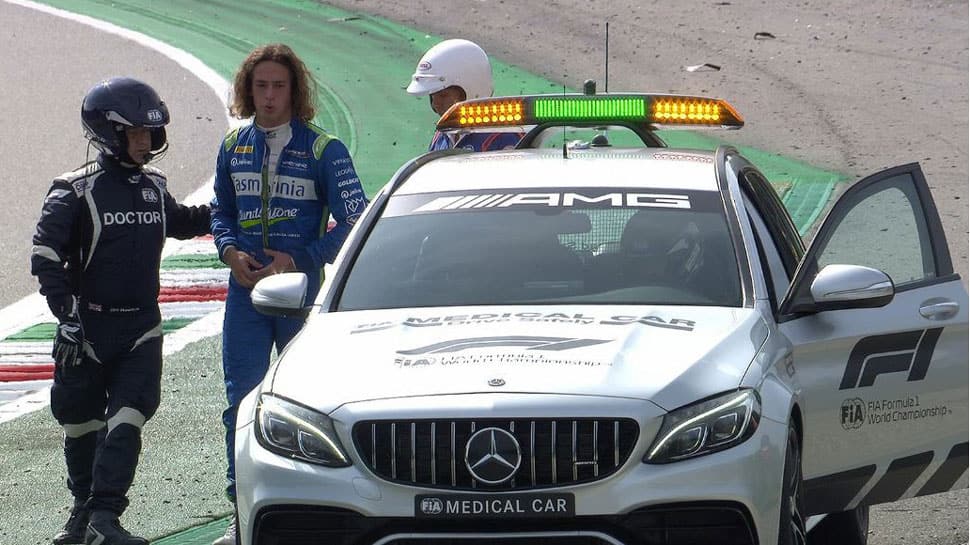 The Hobart-born 19-year-old hit a `sausage` kerb at Parabolica and his Campos Racing car was flung high into the air before flipping and landing upside down on the tyre wall, coming to rest against the wire fence.

We are all extremely relieved that Alex Peroni walked away from this crash during Race 1 in Monza.

Peroni, who walked to the medical vehicle unaided, gave an update on Instagram.

"Currently recovering in hospital with a broken vertebra. Not sure the recovery time but hope to be back in the car as soon as possible," he said.

No other driver was involved, with the race finishing behind the safety car, but the shocking incident caused further concern in a sport still reeling from last weekend`s events in Spa-Francorchamps.

Formula One`s final practice session before qualifying was delayed while repairs were made to the barriers and the offending kerb was removed.

Renault Formula One driver Daniel Ricciardo, who had been watching his compatriot`s race, said another lesson had been learned.

"You would never think that little kerb there could have such an impact," he said. "Unfortunately sometimes something needs to happen until you realise the consequence of it. I never, ever looked at that kerb thinking that`s a danger, that`s a threat."

"Crazy. It`s another lesson for us. Even if it seems like nothing, you get a little bit of turbulence under the car and it can take off...now we just know that we can`t have these (kerbs) on any high-speed corners."

Peroni`s crash also reinforced the importance of the mandatory `halo` head protection system, protecting the Australian from the upside-down impact.

Safety in the motorsport pyramid below Formula One is under increased scrutiny after last Saturday`s tragedy.

Formula Three qualifying had to be halted on Friday for safety reasons after a queue of cars lined up on the back straight preparing to start their timed runs while others approached at speed.

Hubert, 22, died after his car was hit at speed by Juan Manuel Correa`s after the French driver had gone off into the barriers at Spa`s fast Raidillon corner.

American-Ecuadorian Correa is on life support and in an induced coma in a London hospital after being moved from Belgium.

Hubert was the first driver fatality at a Formula One race weekend since Ayrton Senna and Roland Ratzenberger were killed at Imola in 1994.