Union Minister for Youth Affairs and Sports Kiren Rijiju on Saturday felicitated all the boxers who made the country proud by bagging medals at the recently-concluded Women's World Boxing Championships in Ulan-Ude, Russia. 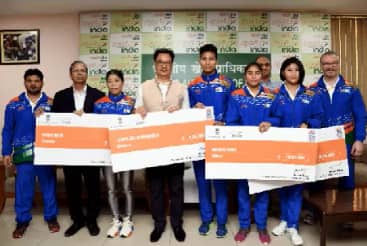 Union Minister for Youth Affairs and Sports Kiren Rijiju on Saturday felicitated all the boxers who made the country proud by bagging medals at the recently-concluded Women's World Boxing Championships in Ulan-Ude, Russia.

While silver-medallist Manju Rani was given a cheque of Rs 14 lakh, the other three Indian boxers who brought back bronze home have received a cash prize of Rs 8 lakh each.

"Best ever result for India in Women's World Boxing Championship! Some special moments with @MangteC #ManjuRani @LovlinaBorgohai @Jamunaboro1 at Sports Authority of India complexe," Rijiju wrote along with the tweet.

On Sunday, Manju Rani settled for a silver medal at the Women's World Boxing Championships after going down against Ekaterina Paltceva of Russia in the summit showdown of the 48 kg category.

Sixth-seeded Manju, who was making her maiden appearance in the event, slumped to a 1-4 defeat at the hands of second-seeded Paltceva in a thrilling final bout of the tournament. As a result, she has also emulated boxing sensation Mary Kom's 18-year-old record of clinching a silver medal on her World Championships debut.

Mary Kom--who became the only women boxer to have clinched eight world championship medals by making it to the semi-final--had to content with bronze in 51 kg category after losing her bout against against Busenaz Cakiroglu of Turkey.

Meanwhile, Jamuna Boro and Lovlina Borgohain--the other Indian in the fray-- also settled for a bronze each in 54 kg and 69 kg category, respectively.

Boro suffered a defeat against Huang Hsiao-Wen of Chinese Taipei in an unanimous 0:5 verdict, while Borgohain slumped to a defeat against China’s Yang Liu in the 69kg category in a 2:3 split decision.