The movie smoothly sailed through Rs 150 crore and is nearing the mammoth Rs 200 crore mark. 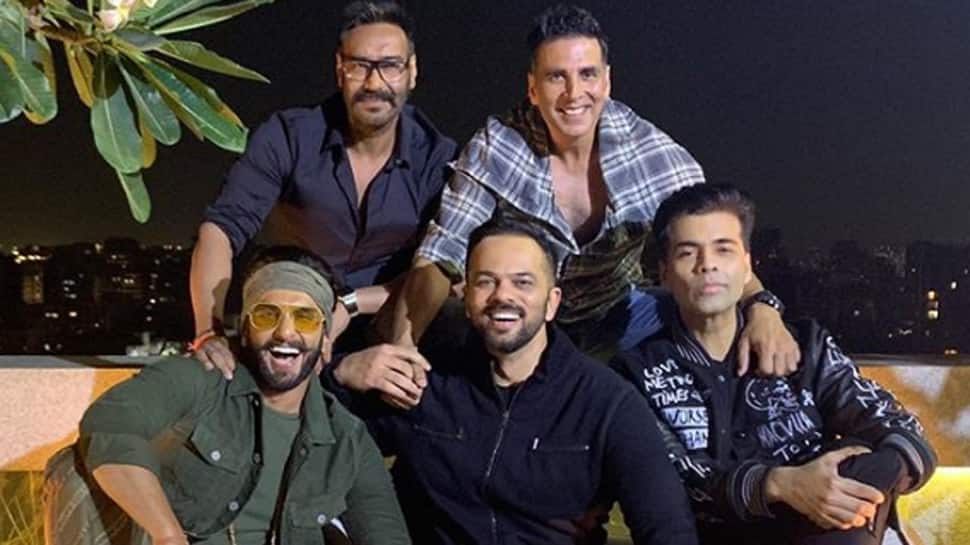 New Delhi: Bollywood biggies Akshay Kumar, Ajay Devgn, Ranveer Singh, Rohit Shetty and Karan Johar had a fab time at the recent 'Simmba' success bash. And guess what? These awesome celebs decided to pose for a quick picture, giving a visual treat to their crazy fans.

Filmmaker Rohit Shetty took to Instagram and shared the iconic picture. He wrote in the caption: “Singham Simmba Sooryavanshi...Coming...Should I tell you Something that you don’t know????”

Singham Simmba Sooryavanshi...Coming...Should I tell you Something that you don’t know???

Well, it's not every day that you get to see these power celebrities together in one frame. The success of 'Simmba' was celebrated last night in Mumbai and several inside videos and pictures have flooded the internet.

'Simmba' director Rohit Shetty will next helm 'Sooryavanshi' starring Akshay Kumar and the fans got a glimpse of it in the climax of the former film.

The movie smoothly sailed through Rs 150 crore and is nearing the mammoth Rs 200 crore mark. has been directed by Rohit Shetty and stars Sara Ali Khan in the lead role opposite Ranveer. The movie also stars Sonu Sood in a villainous role. It has been written by Yunus Sajawal and Sajid-Farhad.