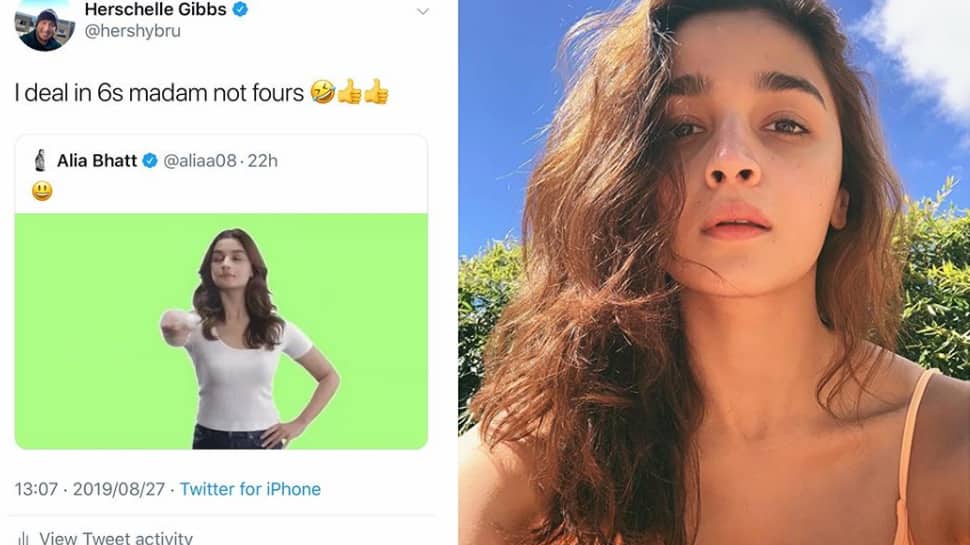 New Delhi: Alia Bhatt is one of the most popular actresses of Bollywood and has a huge fan-following. So when somebody fails to recognise her, it comes as a big surprise. And when that 'Somebody' is a popular figure, things are bound to be noticed!

So when former South African cricketer Herschelle Gibbs couldn't recognise Alia, Twitterati made sure that he knows who she is.

When Twitter users asked Gibbs if he knew who she was, he replied with, “No idea who the lady is .. just a nice gif”

Soon, Tweeples enlightened him and told him that Alia is an actress. Which led him to write, “Didn’t know you were an actress @aliaa08 but nice gif”

Alia had a hilarious response to Gibbs' tweets. She responded via a GIF in which the actress can be seen signalling a 'four' like an umpire.

Think that's the end? You're wrong! Noticing Alia's response, Gibbs once again replied with “I deal in 6s madam not fours', along with a laughing emoticon.

He then added a final tweet, writing “Been a funny few hours but all in good spirits @aliaa08 #twitter #incredibleindia #bollywood #hypemedia #wackywednesday”

Well, those were indeed some funny few minutes we spent while reading the banter!