Alia Bhatt's latest photoshoot gets called out by Diet Sabya, actress hits back

New Delhi: Diet Sabya, the anonymous account that pulls up people for imitations and blatant copies in fashion, has found its new target in Alia Bhatt. The actress' latest magazine shoot wreaked havoc on social media but the anonymous Instagram handle found it rather 'cringeworthy'.

Diet Sabya accused the magazine of blatantly copying the ad shoot of Hollywood singer Dua Lipa. However, Alia, who follows the account, took to her Instagram stories to present her side of the story. She wrote, "I shot for this cover on the 6th of February 2019. If I am not mistaken, the apparent reference was only uploaded on the 24th of Feb. Not to go all True Detective on you guys but give a girl some credit. Toodles." The actress also re-shared the photo collage of two pictures that were posted on social media by Sabya. 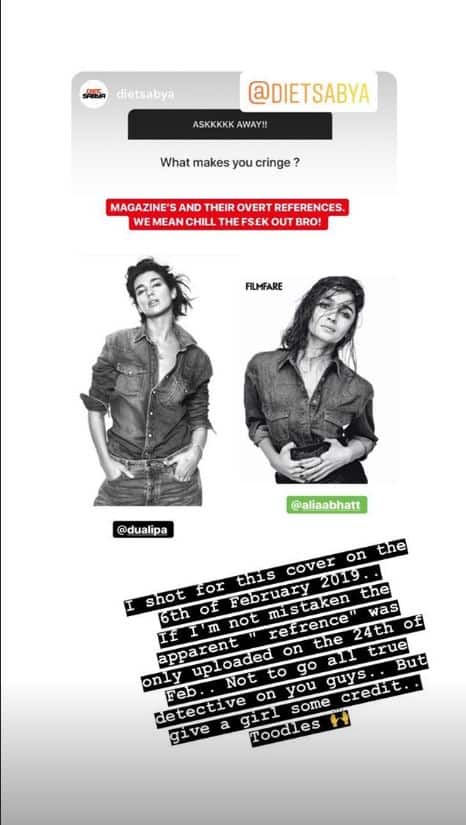 However, this is not the first time this audacious Insta handle has irked an actress, a few days ago it had drawn Sanya Malhotra's ire after it accused her of copying a jumpsuit and calling it a 'Gandi Copy'. The actress, however, gave it back in the most dignified way possible.

Diet Sabya was created to call out the copycat culture in the film industry. It had debuted on March 15, 2018, on Instagram and had over 18k followers in just a month.

Although it is the nightmare for every celeb in Tinsel town, A-listers like Sonam Kapoor, Alia Bhatt follow the account on the photo-sharing app. Nobody knows the person behind the account, no even knows its gender but its never-hold-back opinion is a delight for all its followers.