The initiative has received immense support from everyone and helped the power couple to raise Rs 5 crore for the COVID relief.

New Delhi: Bollywood actress Anushka Sharma along with cricketer hubby Virat Kohli have started a fundraiser to aid India's battle against the raging pandemic. The initiative has received immense support from everyone and helped the power couple to raise Rs 5 crore for the COVID relief.

Overwhelmed by the response, Anushka Sharma took to Instagram and shared the update with her fans and wrote in the story, “A big thank you to all the people who helped us reach this milestone.” 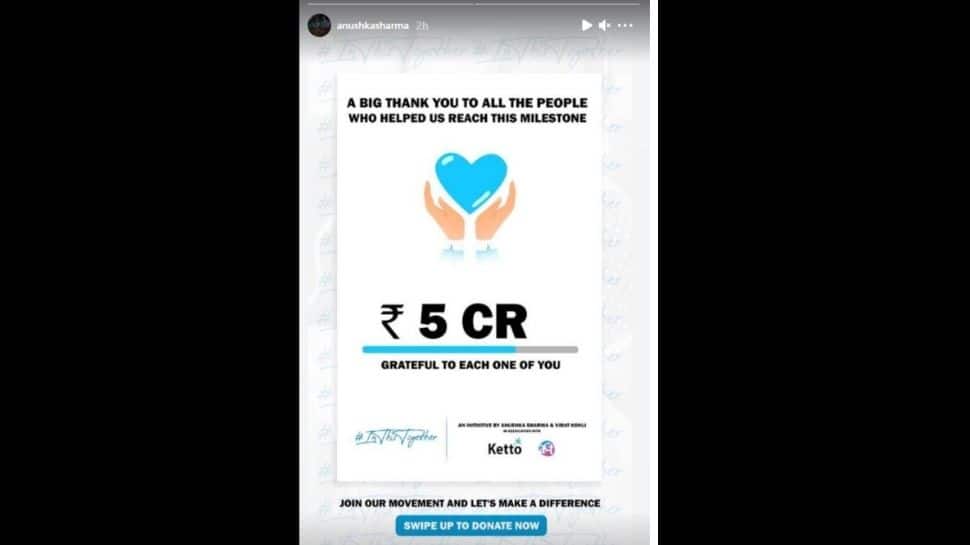 She thanked her fans for their generous contribution and also encouraged everyone to do their bit in these crucial times.

The celebrity couple has also made a donation of Rs 2 crore to the fund-raising project, which will raise a total of Rs 7 crore to support the country's fight against the COVID-19 pandemic. Kohli's IPL franchise Royal Challengers Bangalore (RCB) will also be making a financial contribution to help the healthcare infrastructure related to Oxygen support in Bengaluru and other cities of the country.

Anushka is currently embracing motherhood after welcoming her first child with Virat earlier this year. The couple was blessed with a baby girl named Vamika. The ‘Ae Dil Hai Mushkil’ actress has been away from the limelight for the past two years and hasn’t taken any new projects.