On the work front, the actor will be next seen in an upcoming dark comedy film `Kuttey` alongside Naseeruddin Shah and Konkana Sen Sharma.

New Delhi: Arjun Kapoor shared a glimpse of a dinner date with his lady love Malaika Arora on Monday on social media.

Taking to his Instagram stories, treated fans with a new picture. He called Malaika his "best company". In the picture, Malaika was seen posing with a menu card of KOYN restaurant and she looked gorgeous in a black jacket that was accessorised with a statement ring and wore a subtle makeup look. 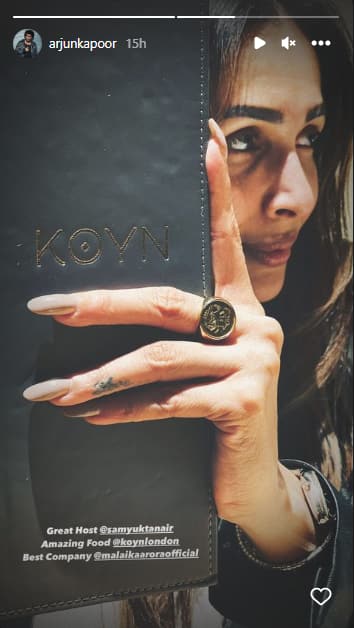 Malaika also re-shared her beau`s post and reacted with emotion. The `Gunday` actor, who is currently in London for the shoot of his upcoming untitled film, was joined by Malaika for the dinner in London. Malaika and Arjun have been dating for quite some time now. However, it was not until a couple of years ago that both decided to make their relationship public.

Talking about Arjun Kapoor`s work front, he will be next seen in an upcoming dark comedy film `Kuttey` alongside Naseeruddin Shah and Konkana Sen Sharma. Helmed by Aasmaan Bhardwaj, the film is all set to hit the theatres on November 4, 2022. `Kuttey` will be facing a big Bollywood clash with Katrina Kaif, Siddhant Chaturvedi and Ishan Khattar`s next horror comedy film `Phone Bhoot`.

Apart from that, he also has director Ajay Behl`s next `The Ladykiller` alongside Bhumi Pednekar and another untitled romantic comedy film with Bhumi.

Meanwhile, Malaika, after glamorizing the film industry with her sexy moves, is all set to become an author. She will soon write her debut book which is going to be all about nutrition. The actor, who also serves as a judge on the reality show `India`s Best Dancer`, will be sharing her wellness tips in the book.