The nuptials took place in the Turkish town of Bodrum in the presence of family and close friends.

The duo tied the knot in a traditional wedding ceremony in the presence of close relatives and friends in the port town in Mugla province on the southern Aegean coast of Turkey. Nusrat's parents, sister and other close relatives flew with her to Bodrum on June 16.

The actress wore a sizzling red lehenga designed by fashion guru Sabyasachi Mukherjee. Nikhil, who is a Kolkata-based entrepreneur with a thriving textile business, also opted Sabaysachi for his D-day outfit.

Guests at the wedding were treated to mouth-watering Turkish delicacies and Indian cuisine.

Bengali actress and Jadavpur MP Mimi Chakraborty, who is one of Nusrat's friends from the industry, was also present at the wedding.

Putting on a canary yellow summer dress, Chakraborty shared a glimpse of the breath-taking venue on her social media account on Wednesday afternoon using the caption 'All set #njaffair'.

On Thursday, the duo will have a white wedding for which Nusrat is believed to have chosen a dress which is a mix of mint green and white.

Nusrat's social media account is buzzing with sneak pics of the gala destination wedding, while she looked stunning in the pictures of her pre-wedding ceremonies like 'haldi' and 'mehndi'. 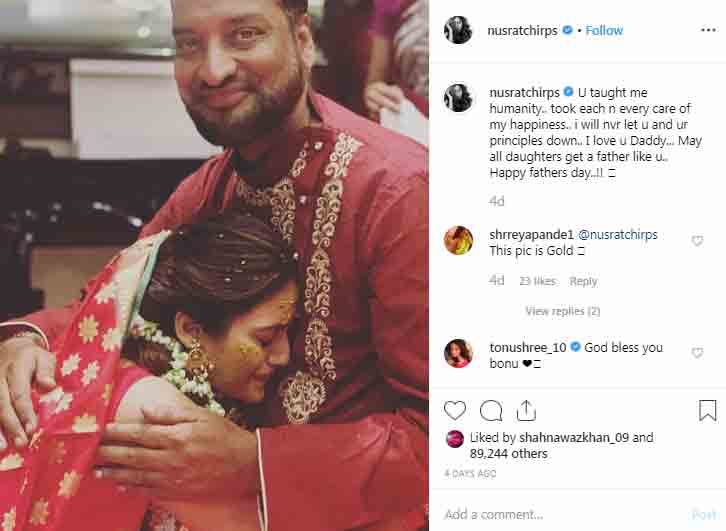 Officially announcing her engagement with Jain, Nusrat had written on Instagram: "When reality is finally better than ur dreams, the best thing to hold on to in life... is each other..!! @nikhiljain09."

Even Nikhil had poured his heart out on his social media account while announcing his relationship with the Bengali beauty.

"You know the meaning of love, when you crave to grow old with that one person; go all chips in for that one person; rediscover ur own self being with that person, and be the partner you d never thought u'd be. Thank you @nusratchirps for making my life the most beautiful one, u made me worthy! It was definitely worth the wait- Destiny! Raabta," he posted.

The 29-year-old actress worked as the face of his textile chain last year when the duo reportedly became acquainted with each other.

The newly-wed couple has planned a gala reception ceremony at a star property in Kolkata on July 4. A large number of Bengali film personalities and political leaders are expected to attend the reception.