The ceremony honoured artists in several categories including the prestigious Lifetime Achievement Award, received by Mary J Blige. Rihanna took to the stage to present Blige with the honour. 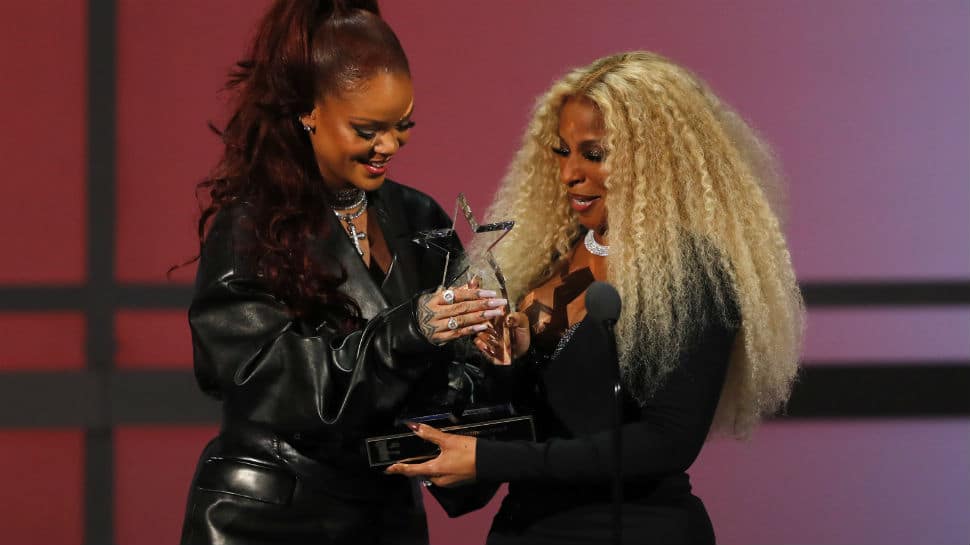 Washington DC: The 2019 Bet Awards hosted by actor Regina Hall at the Microsoft Theater in Los Angeles on Sunday, turned out to be a star-studded night. The award ceremony featured a number of pop stars and rappers who are dominating the music industry right now, from Cardi B to Lil Nas X to Rihanna.

The ceremony honoured artists in several categories including the prestigious Lifetime Achievement Award, received by Mary J Blige. Rihanna took to the stage to present Blige with the honour.

Hailing the legendary singer for her style and sound, Rihanna also mentioned the artist`s history-making two Oscar nominations in the same year, for best actor and original song for `Mudbound`, reported Variety.

Blige also received a standing ovation as she walked to the stage.

Accepting the award, Blige told Rihanna, "I don`t think you know how much I love and respect you. I`m a huge fan and you inspire me right back.

"The legendary singer then gave a heart-moving speech, in which she explained her resilience in her life as well as career."

People always ask how do I sustain and stay relevant in this industry. It`s because, although I am a leader, a queen, and a living legend. I`m a servant as well and I`m here to serve. Being a servant is not always glamorous or popular but it`s the job and the assignment that I was given. It`s because in order to be an authority, I had to learn how to come under authority because when the glory is placed on me I give it back to God immediately," she said.

"This journey has always been bigger than me and my mission is not only just to survive right now, it`s to thrive and continue to make history while I do it," the star added.

Blige, who received the Lifetime Achievement Award, ran through her hits during the performance, which featured Lil Kim and Method Man. The star went from `My Life` to `No More Drama` to `Just Fine,` when audience members showed their best dance moves while the Queen of Hip-Hop Soul sang onstage.

The nine-time Grammy winner went on to thank her father. She also thanked her siblings, nieces, nephews, cousins, aunts, uncles and friends.