Veteran actress Rekha, along with her associate, showed up early at the polling booth number 283 in Bandra. 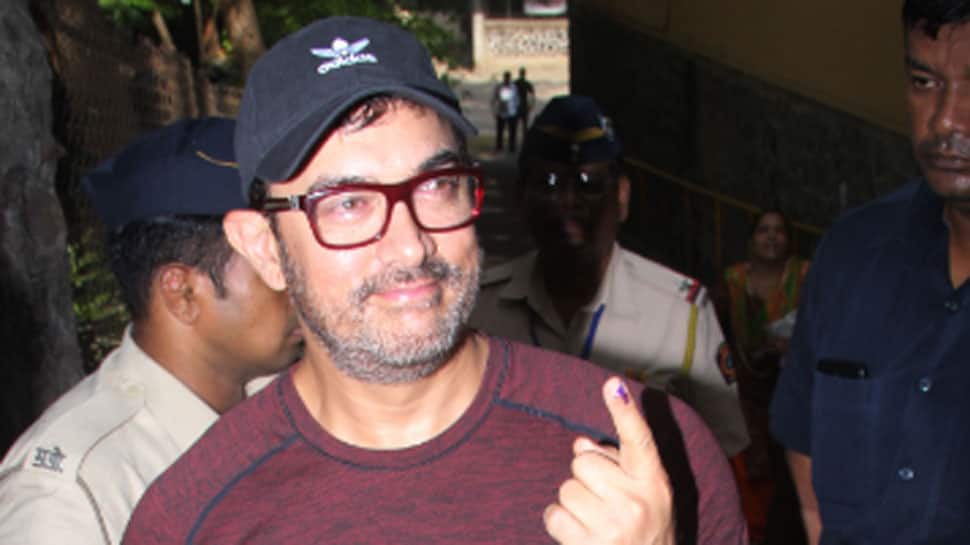 Mumbai: Aamir Khan, Priyanka Chopra Jonas, Urmila Matondkar, Madhuri Dixit Nene and a stream of other Bollywood celebrities on Monday voted in the fourth phase of the Lok Sabha elections here in Mumbai and urged others to step out and make their vote count.

"This is the moment that matters... Every vote is a voice that counts," tweeted Priyanka along with a selfie showing off her inked finger.

Veteran actress Rekha showed up early at a polling booth in Bandra.

Veteran actor and politician Paresh Rawal, along with his wife Swaroop Sampat, voted at the Jamna Bai School in Vile Parle.

Aamir, dressed casually, cracked a joke as the media approached him for a byte, but made a point about the importance of voting.

Actor Rahul Bose returned to Mumbai from shooting in Hyderabad to vote and then quickly made his way back to the shoot.

Pooja said it was gratifying to see a long line of voters outside a polling station in Bandra.

"Well done Bandra! You make me proud! Big thank you to all the volunteers and to police personnel keeping vigil," she tweeted before going to cast her vote.

Actress Divya Dutta urged: "Vote, not because just your life depends on it. Vote because an entire nation does. One vote can make the difference. Be your change."

Filmmaker Prakash Jha, who has had a tryst with politics, went to vote with his daughter.

"Both, respectfully, for our different preferences! But we voted for the peace, prosperity and pride of our beloved India. And most of all, the dignity of each of our brothers and sisters of this great nation."

Madhuri wrote: "Voting is our right, let's use it wisely! The future of our country is in our hands. Let's do our duty and vote for India."

R. Madhavan, who went to a polling booth with his wife, urged the youth to give "no excuses" for not voting.

Actress Gul Panag wrote: "Go out and vote. Because the future depends on it. And not just our future, but the future of the next generation too. Every vote counts."

This election season, the film fraternity has been visibly divided over support for the competing political parties.