New Delhi: Bollywood actor Ranveer Singh, who will star in the biopic of cricketer Kapil Dev titled 83', has started prepping up for his role at a training camp in Dharamshala.

Ranveer shared a few pictures and videos with Kapil Dev on  Instagram. In the video, Kapil Dev can be seen teaching Singh his iconic style of hitting the ball. However, the video got the best reaction from Deepika Padukone.

Deepika's comment read, "make the most of it...these moments will never come back!im soo proud of you!" 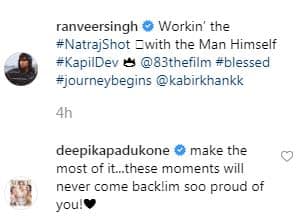 Kapil Dev's biopic titled 83 the film has been high on the buzzword ever since it was announced and is based on India's historic victory of 1983 world cup.

The film marks 'Qismat' singer Ammy Vir's Bollywood debut. Ammy will reprise the role of fast bowler Balwinder Singh Sandhu who had delivered the most memorable ball in the final match.