New Delhi: The beautiful Disha Patani often grabs headlines due to her alluring social media posts. Disha, who made her Bollywood debut with 'MS Dhoni: The Untold Story' is an internet sensation today and has a huge fan following. With over 18 million followers on Instagram, her pics and videos often go viral and fans absolutely love to know more about the actress.

Disha is known to be a fitness freak and often shares inspiring workout videos and pics. The actress took to Instagram stories on Friday and shared another pre-workout picture flaunting her perfectly toned body. She is accompanied by her little pooch in the pic and it will make you go 'awww'!

Check out the screenshot of her Instagram stories here: 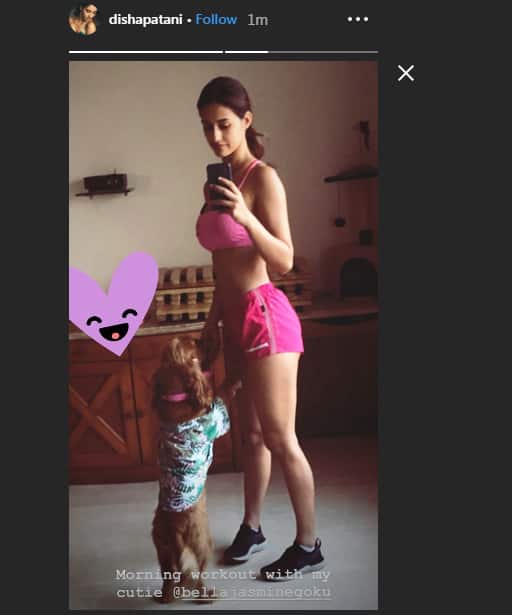 Disha will soon light up the silver screen with her presence in 'Bharat'. The film is helmed by Ali Abbas Zafar and has an ensemble star cast including Salman Khan, Katrina Kaif, Tabu, Sunil Grover, Nora Fatehi, Varun Dhawan to name a few.

'Bharat' will on June 5 this year and is high on the buzzword ever since it was announced. Disha will play a trapeze artist in the film and we are curious about her look in the film which has not yet been revealed.

On the personal front, the gorgeous actress is rumoured to be dating her 'Baaghi 2' co-star Tiger Shroff and is often clicked by the paps with him. Neither Disha nor Tiger, however, have confirmed their relationship status.