Here's what Kareena Kapoor will do if stuck in a lift with Ranbir's girlfriends Deepika, Alia and Katrina

Bollywood heartthrob Ranbir Kapoor has dated some of the leading ladies of Bollywood and is currently in a relationship with one. 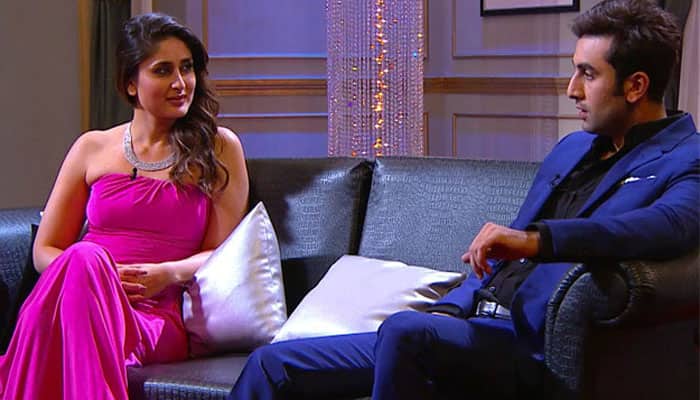 New Delhi: Bollywood heartthrob Ranbir Kapoor has dated some of the leading ladies of Bollywood and is currently in a relationship with one.

After dating Deepika Padukone and Katrina Kaif for years, Ranbir is now dating Alia Bhatt and are going pretty song. His cousin and Bollywood superstar Kareena Kapoor has always had an opinion about his former girlfriends and this time too when she was asked about them, she had a hilarious reaction.

Kareena, who was in Australia to unveil the trophies of the T20 World Cup for men and women, was asked what would she do if she gets stuck in a lift with Ranbir's former and current girlfriend. “I will make sure Ranbir is not in the lift. Or maybe, I should make sure he is in the lift, " the actress said.

On Friday, Kareena unveiled the T20 trophies at the Melbourne Cricket Club and also posed with the trophies.

Speaking about the event, Kareena was quoted by HT as saying, “I am honoured to be a part of this prestigious evening. I would like to encourage all these women out there who are playing for their respective countries to pursue their dreams. Its truly empowering to see them stand tall on an international platform. They are an inspiration to one and all. My late father-in-law was one of the greatest cricketers who played for the Indian cricket team and it is an honour for me to be unveiling the trophy.”

On the work front, Bebo will be seen in Good Newzz opposite Akshay Kumar, Laal Singh Chadha opposite Aamir Khan and Kjo's Magnum Opus Takht.