Hina walked the red carpet of Cannes for the first time and looked stellar in a sparkling silver gown with plunging neckline.

New Delhi: Actress Hina Khan is known to be a fashionista and has time and again left us impressed with her outfit choices. She is all set to venture into the film industry with the movie 'Lines' which is directed by Hussain Khan.

Its first look will be unveiled at the prestigious Cannes Film Festival that began on May 14 and will end on May 25. Hina walked the red carpet of Cannes for the first time and looked stellar in a sparkling silver gown with plunging neckline.

She shared the pictures from the event on her Instagram stories.

Check out the screenshots here: 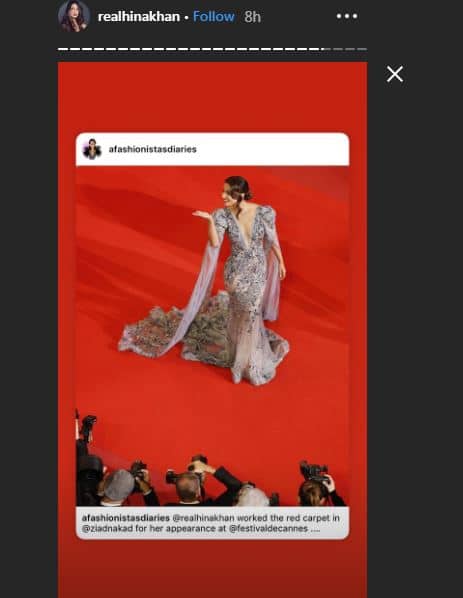 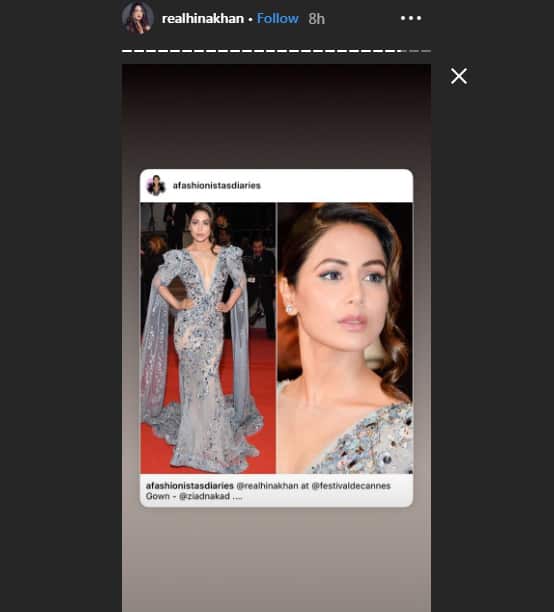 The actress also posted a pic from the event, captioning it as, “#Cannes2019 The picture is just not “a” picture. #GodsSign#ShiningStar @festivaldecannes”

The stunner ruled the television industry for years with her show 'Yeh Rishta Kya Kehlata Hai'. Hina played the lead role of Akshara, the ideal 'bahu' in the show and became a household name post her stint.

After this, she was seen in one of the most controversial and popular reality show 'Bigg Boss' season 11. Hina became the first runner up of the season and won a lot of hearts during her stay in the BB house. Even inside the show, her outfits received special attention.

From Akshara, to Bigg Boss finalist to making such a stunning appearance at the Cannes Film Festival, Hina has surely come a long way!

Here's wishing all the very best to the actress and wishing her success in her future endeavors.