Hrithik's ex-wife Sussanne, who shares a cordial relationship with the actor, has once again come to the defence of the actor amid ongoing family tensions regarding his sister, Sunaina.

And it seems to be getting messier day by day for Hrithik Roshan and his family.

A day after Hrithik's cousin Eshaan Roshan came out in support of the 'Kaabil' actor in the Sunaina Roshan allegations, the actor's former wife Sussanne Khan has now come out in his defence asking people to respect the family's privacy in the crucial time.

Extending her support to Hrithik and the entire Roshan family, Sussanne took to her Instagram account to issue a statement requesting everyone to respect the family in the tough period and not make things worse for them. "As a part of my experience with all concerned and in my life span of being a part of this close-knit family, I know Sunaina, to be an extremely loving warm, caring person, who is in an unfortunate situation. Sunaina's father is undergoing a major health crisis. Her mother is herself vulnerable to say the least. Please respect a family's tough periods, each family goes through such times. I needed to say this as someone who has been a part of this family for long," she wrote in a post. 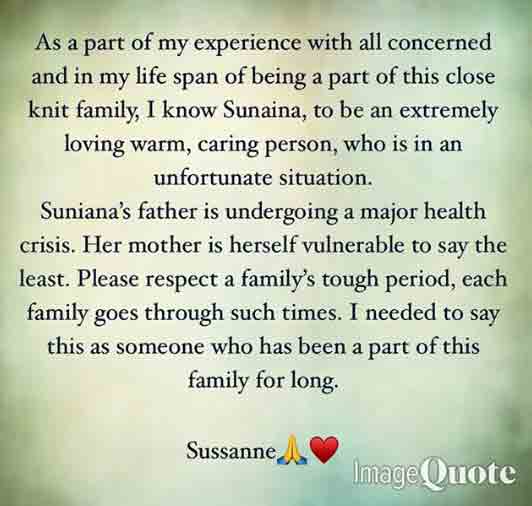 Yesterday, Eshaan Roshan also took to Twitter to slam Kangana and her sister Rangoli in a series of tweets. He wrote, "It's sad to see how people can stoop this low as to use a vulnerable period of the family for their own ends. Even if there is a family crisis, Didi has the law and order machinery of this country for her."

In another tweet, attacking Kangana and Rangoli, he further added, "Why are these sisters obsessed with this family? My bade papa is undergoing a health crisis, Didi is vulnerable. It’s a very sensitive period for our family. I request these people to be sensitive and not act as vultures." 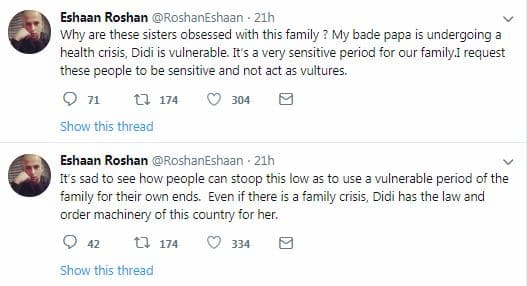 Rangoli even claimed that Sunaina had been asking Kangana for help in the matter.

And in case you haven't checked out her tweets, here are they: 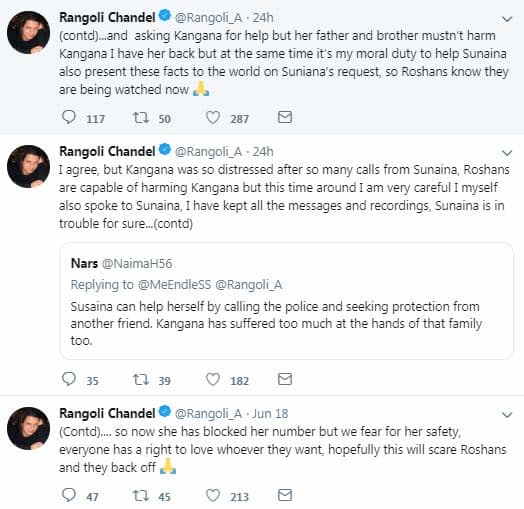 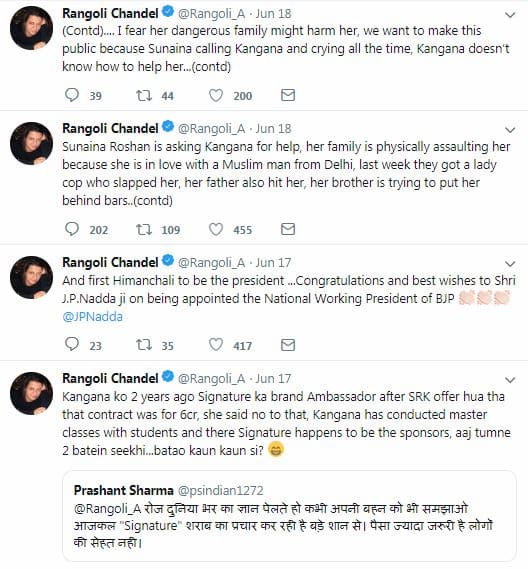 For the unversed, Sunaina took everyone by storm when she alleged that her family, including her brother Hrithik, had been extremely unkind and unsupportive of her in recent times. She even tweeted her support for Kangana in the famous Hrithik-Kangana war which has been going on for over three years now.