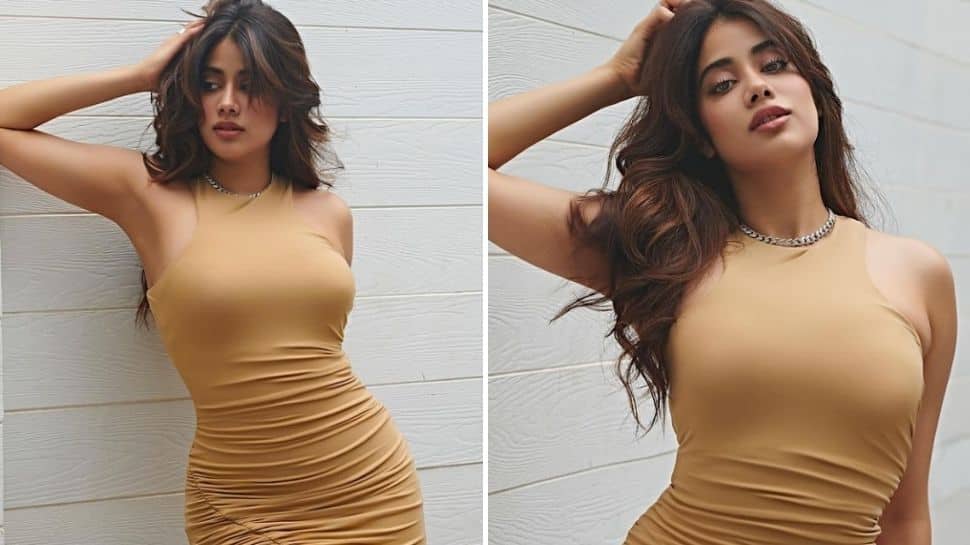 New Delhi: Raising fashion goals, Bollywood star Janhvi Kapoor on Sunday treated fans to stunning pictures in a beige ensemble. The daughter of late legendary actor Sridevi and producer Boney Kapoor is undoubtedly one of the leading fashionistas from the young generation in Bollywood and her latest post is proof of this. The `Dhadak` actor hopped onto her Instagram handle and shared snaps from a recent photoshoot.

In the pictures, the actor is seen striking a candid pose, while she looks off the camera. With her locks open, the actor personified beauty in a body-hugging beige dress that she accessorized with matching jewellery.

Kapoor's dress had a turtle neckline which hugged and complemented the actor's perfectly toned figure. Celebrity followers including Manish Malhotra and more than 4 lakh fans liked the post within 48 minutes of being posted.

Her pictures got several compliments from her fans. "Looking Gorgeous Mam," wrote one fan. "Mam you are so much beautiful," wrote another one. The post received more than 5 lakh likes.

The horror-comedy became the first film to arrive in theatres after the government allowed cinema halls nationwide to operate at full capacity from February 1 with COVID-19 safety protocols put in place.

Kapoor`s upcoming projects include Anand L Rai's 'Good Luck Jerry', the shoot for which she wrapped up in March. Other than that, she will be seen in `Dostana 2` and is reportedly a part of Karan Johar`s period drama `Takht`, alongside bigwigs like Kareena Kapoor, Ranveer Singh, Anil Kapoor, Vicky Kaushal, and more

'Hope I get your swag some day': Kartik Aaryan mourns demise of grandfather