A month after exchanging wows in France, Joe Jonas gave a glimpse of his adventurous yet refreshing honeymoon in the Maldives. Joe posted a series of pictures of him and wife enjoying the vacation, where according to his post he "found happiness". 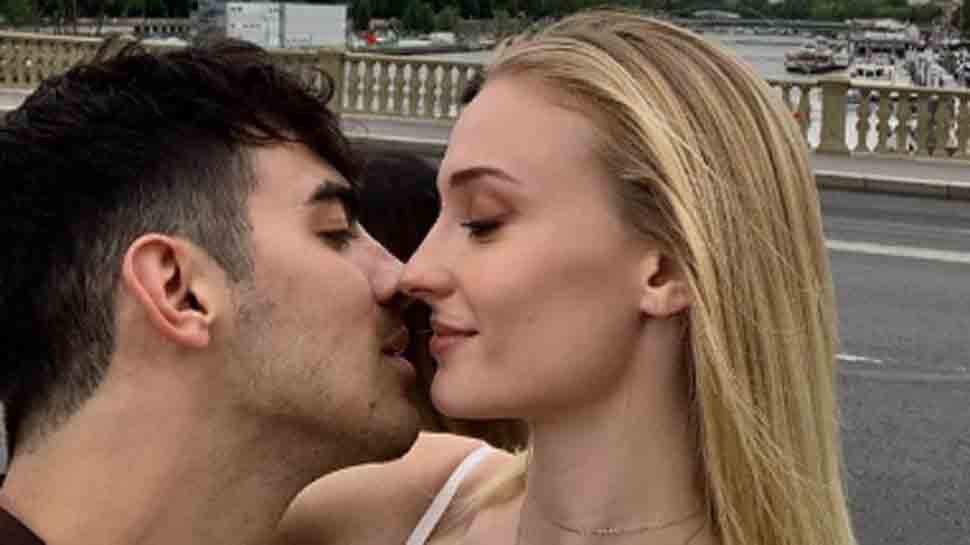 New Delhi: A month after exchanging wows in France, Joe Jonas gave a glimpse of his adventurous yet refreshing honeymoon in the Maldives. Joe posted a series of pictures of him and wife enjoying the vacation, where according to his post he "found happiness".

In one of the video, the singer is seen sliding down into the clear waters of the island whereas his wife can be spotted rejoicing in a beautiful pink swimsuit while flaunting her pear-shaped diamond wedding ring. In October 2017, after the couple got engaged, the 'Game of Thrones' actor shared an Instagram post showing off her wedding ring and wrote, "I said yes."

The newly married couple celebrated their love all over again in a second ceremony, in France, on June 30. The first wedding ceremony was held in Vegas in May and took everyone by surprise. Turner and Jonas first tied the knot on May 1 in a quick ceremony in Las Vegas and then got hitched in a more lavish ceremony in France with their friends and family in attendance.

Not just her stunning wedding band, but her wedding dress is also just as special. While the actor wore a chic white jumpsuit to her and Jonas' first wedding in Las Vegas, for the second ceremony she went for a more traditional look.

The actor looked absolutely breathtaking in her wedding dress, which looked nothing less than a dream, courtesy Louis Vuitton.

The stunning gown, which featured an optical white leather satin belt, included over 14 meters of embroidered tulle using floral patterned thread. And interestingly, it took 75 hours of digital design to create the pattern of over 650,000 stitches.

Each panel in the dress was embroidered with 50,400 crystal eclats and 50,400 white beads. More than 10 embroiderers worked for a total of 1,050 hours on the wedding gown. Overall, Turner's wedding dress took more than 350 hours to assemble.