Mourning the loss of their dog, Sophie Turner and Joe Jonas paid a heartfelt tribute to Waldo by getting matching tattoos in honour of their beloved pup on their forearms.

Washington DC: Actor Sophie Turner and singer Joe Jonas lost a member of their family last week when their late pup, Waldo Picasso was killed in an accident.

Mourning the loss of their dog, the couple paid a heartfelt tribute to Waldo by getting matching tattoos in honour of their beloved pup on their forearms.

The `Jonas Brother` singer and the `Game of Thrones` actor, whose Alaskan Klee Kai dog was reportedly struck and killed by a car in New York City last week, took to social media on Monday to pay tribute to their "angel."

"I miss you, Waldo. Rest in peace my little baby," Turner wrote on her Instagram Story along with a photo of the new ink. 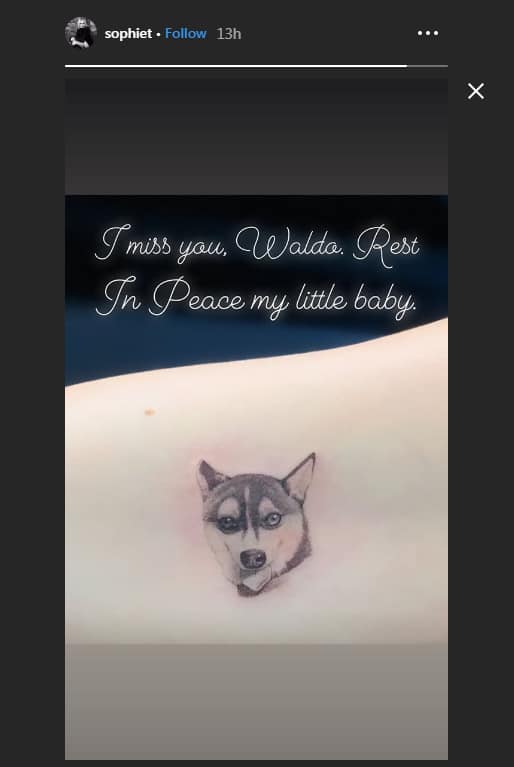 Jonas also posted a photo of his tattoo on social media, writing, "R.I.P. my little angel."

In the comments section of the singer`s post, his brother Nick Jonas left a praying hands emoji, while Nick`s wife Priyanka Chopra commented with a heart.

Of the incident, an NYPD spokesperson told E! News, that a woman filed a police report on Friday, saying that on Wednesday around 11:30 pm, a vehicle did not stop and struck a dog on the street before leaving the scene.

The woman said that the dog was brought to a hospital, where the pup passed away. At the time, the spokesperson said the NYPD could not confirm the name of the woman or the owners of the dog.

According to TMZ, Jonas and Turner`s dog walker had Waldo on a leash while out on the Lower East Side of the city. The outlet reported that the pup "got spooked by a pedestrian" and ran into the street before being struck by the vehicle. A Jonas rep called the incident "a freak accident." Jonas and Turner have another dog Porky who is the brother of Waldo. Jonas originally got Porky as a surprise for Turner, but later adopted Waldo.