After PM Modi's appeal to keep the Kumbh Mela festivities 'symbolic' this year, Kangana posted a tweet addressed to the PM asking to stop Ramzan gathering as well. However, she deleted the tweet later.

New Delhi: The 'Thalaivi' actress Kangana Ranaut took to Twitter on Saturday (April 17) to express her opinion on PM Narendra Modi's Saturday appeal on treating the Kumbh Mela celebration as a 'symbolic' event this year due to the pandemic. Later, the actress deleted her tweet.

However, many users had taken a screenshot of the tweet before its deletion. In the tweet, Kangana wrote, "After kumb mela...Honourable Prime Minister ji please request to stop Ramzan gathering also". 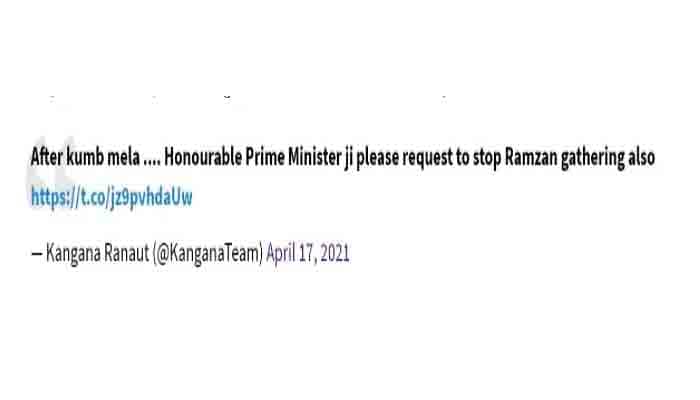 Earlier Kangana had made headlines when she released a statement on the news of Bollywood actor Kartik Aryan being dropped from Dharma Productions' much-talked-about venture 'Dostana 2'. In a series of tweets, Kangana slammed Karan Johar and asked him to leave Kartik alone and urging him to not make another Sushant Singh Rajput out of Karthik.

On the work front, Kangana will next be seen in AL Vijay’s biopic on previous movie star and three times Chief Minister of Tamil Nadu J Jayalalithaa called ‘Thalaivi.’

She will also be seen in Razneesh Ghai’s action thriller ‘Dhaakad’ and Sarvesh Mewara’s ‘Tejas’.

Kangana’s film ‘Thalaivi’, which was all set to release in theatres on April 23, has been indefinitely postponed due to the rising cases of COVID-19 in the country.