Isn't it amazing that these stars can wear cool stuff while batting an important idea or message through it? 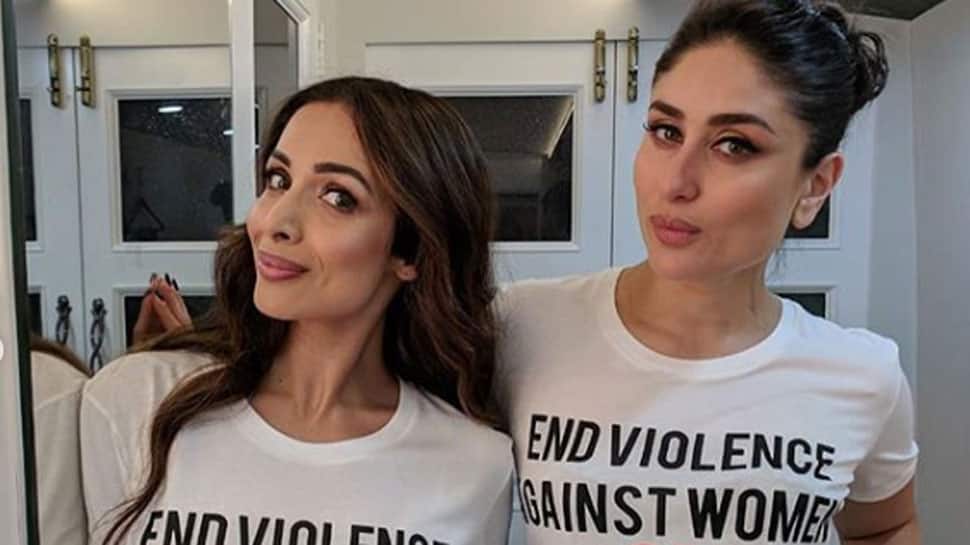 New Delhi: What happens when two gorgeous women end up wearing the same t-shirts to work? Well, you click a series of pictures and post it on social media. That's exactly what happened when Kareena Kapoor Khan and Malaika Arora wore the same t-shirt to work. And we are totally loving this coincidence!

Malaika took to her Instagram and shared a series of pictures with Bebo. Both turned up to work wearing a D&G white t-shirt with the slogan which reads 'End Violence Against Women'. Check it out here:


Wat a coincidence !!!!!! When the gfs dress the same to work ,coz we gurls think alike ..... #endvoilenceagainstwomen #teeslogans#twinning #kareenakapporkhan #bebomalla#watwomenwant

Isn't it amazing that these stars can wear cool stuff while batting an important idea or message through it?

We have often spotted Kareena Kapoor Khan, Karisma Kapoor, Malaika Arora and Amrita Arora hang out together in and around the city. The BFFs of B-Town are gym buddies too!

On the work front, Bebo has 'Good News' starring Akshay Kumar, Diljit Dosanjh and Kiara Advani. It will be helmed by debutant Raj Mehta. It is backed by Karan Johar's Dharma Productions.

Then she will also be seen in Kjo's ambitious period drama 'Takht' which is slated for release in 2020. Based at the backdrop of the Mughal dynasty, the movie has an ensemble star cast of Ranveer Singh, Kareena Kapoor Khan, Alia Bhatt, Vicky Kaushal, Bhumi Pednekar, Janhvi Kapoor and Anil Kapoor.