The stylish sister of B-Town stole the show with their latest picture on Instagram.

New Delhi: Actress Karisma Kapoor, who turned a year older on Tuesday, is celebrating her day with sister Kareena Kapoor in London. On the occasion, she took to Instagram to share a stylish photo of her with her darling sister, where they are seen striking a perfect pose for the lens, in what appeared to be English countryside.

In the photo, the Birthday Girl is seen in a grey sweater, black culottes and black stilletoes whereas Kareena looks stunning in a fuchsia pink sweater, denims and brown shoes. Karisma captioned the picture writing, "#chill". Take a look at her post: 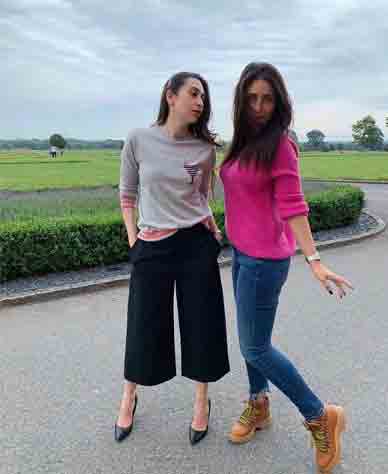 Kareena and Karisma are undoubtedly one of the most stylist sisters of Bollywood. They make sure to spend time with each other and often travel overseas with their children. Karisma, who is quite active on social media, makes sure to treat her fans with their pictures and videos on a regular basis.

In another picture shared by Karisma on Instagram, she is seen posing with Bebo and her mom Babita. 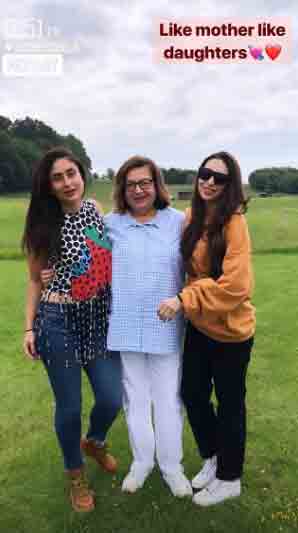 In a separate post on Monday, Karisma shared a picture with Kareena and it appeared that the Kapoor sisters, dressed in black ensembles, had a gala time at a club named Anabel in London. In another poster, shared by a fan club, Karisma and Kareena are joined by Saif Ali Khan, who looked absolutely dapper in a striped shirt and blazer. Take a look: 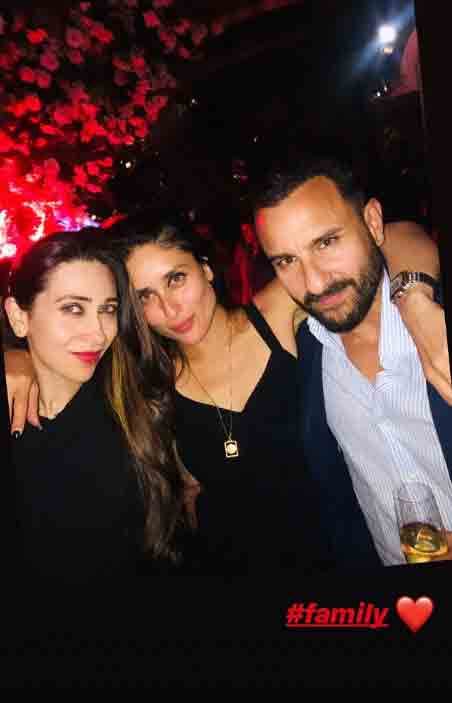 Earlier, Kareena and Saif were holidaying in Tuscany. Later, the couple flew to their favourite destination, London, where they were joined by Karisma and her children - Samaira and Kiaan. Currently, the family is holidaying in Dogmersfield, a small village in Hampshire, England.

On the work front, Karisma is all geared up for her debut web series 'Mentalhood' to go on air. On the other hand, Kareena is looking forward to the release 'Good News', her film with Akshay Kumar, Diljit Dosanjh and Kiara Advani. Next up, she will begin filming 'Angrezi Medium' opposite Irrfan Khan and later, the multi-starrer 'Takht'.

She is also geared up for her debut as a judge on television show 'Dance India Dance'. Kareena was last seen in 'Veere Di Wedding', which released in June 2018.