Veteran music director-composer passed away at Sujoy Hospital in Juhu, Mumbai on Monday night due to age-related illness.

New Delhi: The last respect of veteran music director-composer Mohammed Zahur Khayyam Hashmi, who passed away on Monday evening due to age-related illness, will be held at 9 am at Dakshina Park, JVPD Circle in Juhu, Mumbai on Tuesday.

Khayyam, 92, was admitted to the intensive care unit (ICU) of Sujoy Hospital in suburban Juhu a few days ago due to breathing issues and other age-related illnesses.

The musician, a recipient of Sangeet Natak Akademi Award and Padma Bhushan, was admitted in a critical condition due to infection in lungs, as was informed by BN Tiwari, president of the Federation of Western India Cine Employees Union.

India will remain grateful to Khayyam Sahab for giving us some of the most memorable compositions, which will be remembered forever. He will also be remembered for his humanitarian gestures to support upcoming artists. His demise is extremely saddening. — Narendra Modi (@narendramodi) August 19, 2019

Lata Mangeshkar also took to Twitter and wrote that Khayyam's demise is the end of an era in music. "Great musician and a man with a kind heart, Khayyam sahab isn't with us anymore. I am so saddened to hear this, I can't put it in words. With Khayyam sahab, an era of music has ended. I offer my humble tribute to him," she wrote. 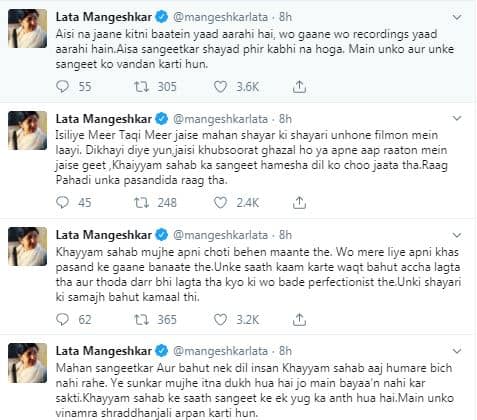 Khayyam began his career in music at the tender age of 17 from Ludhiana. He got his first big break in blockbuster 'Umrao Jaan' through which he made his permanent place in Bollywood industry. He won National Award, and also a Filmfare Award, besides a few other tributes for composing music for the flick which stars Rekha, Raj Babbar, and Naseeruddin Shah.

Some of his other non-film songs were also quite popular among his fans, especially 'Paaon padun tore shyam,' 'Brij mein laut chalo' and 'Ghazab kiya tere vaade pe aitbaar kiya'. He also composed music for Meena Kumari`s album, "I Write, I Recite" featuring her singing her own poetic compositions.