These awards are conferred by President of India at ceremonial functions which are held at Rashtrapati Bhawan usually around March/April every year. 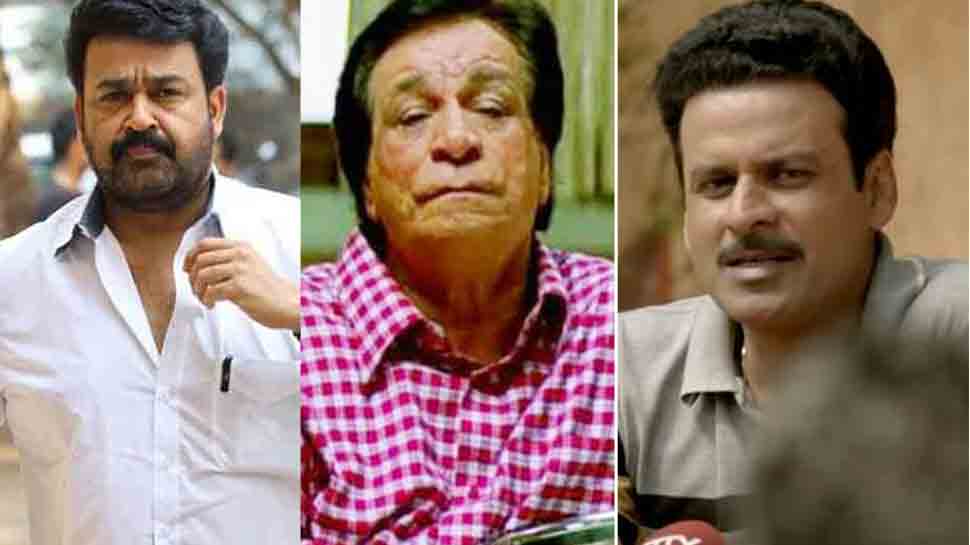 New Delhi: Eminent personalities from film and theatre industry - Manoj Bajpayee, Prabhu Deva, Mohanlal and late actor Kader Khan were among the 112 prominent personalities who were named for conferment of this year's Padma award, on the eve of country's 70th Republic Day.

From theatres, actor-comedian Dinyar Contractor and director Waman Kendre will be awarded the Padma Shri while Balwant Moreshwar Purandare will be honoured with the Padma Vibhushan award.

Manoj Bajpayee is one of the most talented actors of the industry. The actor is known for his work in films like 'Gangs Of Wasseypur', 'LoC Kargil', 'Aks', 'Shool', among others. Manoj made his debut in the film industry in 1994 with 'Drohkaal' and 'Bandit Queen'. In 1998, he won the national award for his role in 'Satya'.

Bhupen Hazarika, who died in 2011 at the age of 85 years, was a poet, playback singer, lyricist and filmmaker all rolled into one, and his works were marked by humanity and universal brotherhood. He had introduced culture and folk music of Assam into Hindi cinema at the national level.

Kader Khan, an Indo-Candian actor, script and dialogue writer, who passed away early this month, will be conferred with Padma Shri (posthumous-foreigner). Kader featured in more than 300 films in his career, was best known for his brilliant comic timings on the screens. Apart from acting, Kader wrote dialogues for over 250 films, including some of the biggest blockbusters of the '70s and '80s such as 'Dharam Veer', 'Ganga Jamuna Saraswati', 'Coolie', 'Desh Premee', 'Suhaag', 'Parvarish', 'Amar Akbar Anthony', 'Sharaabi', 'Lawaaris' and 'Muqaddar Ka Sikandar'.

From the world of music, versatile singer-composer Shankar Mahadevan, who is proficient in classical as well as mainstream Hindi film music, has been chosen for the Padma Shri.

However, in times, when gender equality is much spoken about, the Padma awardee list, however, makes no mention of a woman from the film industry.

This year the President has approved conferment of 112 Padma Awards including one duo case (in a duo case, the Award is counted as one). The list comprises four Padma Vibhushan, 14 Padma Bhushan and 94 Padma Shri Awards. As many as 21 of the awardees are women and the list also includes 11 persons from the category of Foreigners/NRI/PIO/OCI, 3 posthumous awardees and one transgender person.

These awards are conferred by President of India at ceremonial functions which are held at Rashtrapati Bhawan usually around March/ April every year.