Kartik has a huge fan following and his over 10.8 million followers on Instagram explain that.

New Delhi: The 'it' boy of Bollywood, Kartik Aaryan has been declared as the 'national crush' on social media by crazy fangirls. The 'Sonu Ke Titu Ki Sweety' star swooned into the hearts of the audience with his amazing acting chops and the chocolate boy looks.

The actor, who is currently shooting in Lucknow for 'Pati Patni Aur Woh' remake took some time off from shooting and posted a picture on Instagram where he can be seen perfecting his wink just like internet sensation Priya Prakash Varrier. He wrote in the caption: “Shhh... Just #PoseLikeKartikAaryan”

Check out the comments: 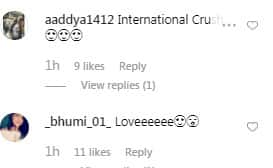 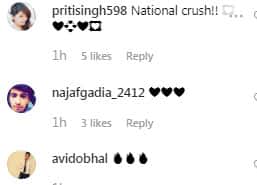 While he is asking people to pose like him, netizens flooded his comment section where some compared his wink with that of Priya and others called him 'nation crush'. His timeline is loaded with love-filled comments from fangirls.

Kartik has a huge fan following and his over 10.8 million followers on Instagram explain that.

On the work front, he will be seen opposite Ananya Panday and Bhumi Pednekar in 'Pati Patni Aur Woh' remake. Before kicking off this movie's shoot, he wrapped up Imtiaz Ali's 'Love Aaj Kal sequel' with Sara Ali Khan.

The buzz is strong that Sara and Kartik are dating but the duo has not publicly spoken about it.

Kartik will also be seen in Karan Johar's 'Dostana 2' with Janhvi Kapoor. The makers announced the project lately and another actor will soon join the cast.