The controversy started after Neha Dhupia reprimanded a male contestant of 'Roadies Revolution' for slapping a girl for allegedly cheating on him with five other boys. She also defended the girl saying as far as cheating goes, "It's her choice". 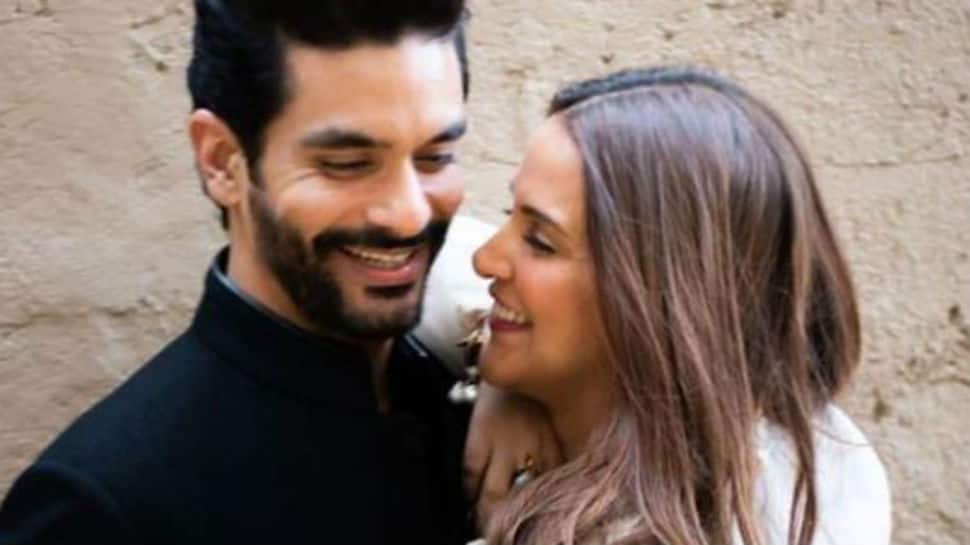 New Delhi: Actor Angad Bedi has shut down trolls targetting his actress wife Neha Dhupia for reprimanding a male contestant on the TV reality show 'Roadies Revolution' with a post about his '5 girlfriends'. Yes, of course, it features him with Neha and with the set of multiple photos, he wrote, "Sun meri baat... Here are my 5 girlfriends! Ukhaad lo jo ukhaadna hai. #itsmychoice (Do whatever you want to)". Here's his post.

For the uninitiated, Neha was heavily criticised for her comment that seemed like she was defending a girl for cheating in a relationship. She had rebuked the contestant for slapping a girl for allegedly cheating on him with five other boys and said that "it's her choice" but "nobody gives him the right to slap her".

Soon, she posted a lengthy statement declaring she has been misinterpreted. Responding to the trolls, Neha wrote: "Roadies is a show that I have been a part of for five years and enjoyed every bit of it. It takes me all over India and gives me the opportunity to team up with absolute rock stars from all parts of the country. What I do not like or accept is what is happening for more than two weeks now! Recently during one of the episodes that aired, I took a stand against violence."

"A guy talked about his partner who cheated on him (allegedly) and in retaliation, he hit her by his own admission. What the girl did is a choice she made which is a moral choice regardless of someone, man or woman... adultery is a moral choice. Cheating is not something I stand for, and it is unfortunate that I have been misrepresented for the same... but what I do stand for is women's safety."

She also stated how trolls have affected her family members.

"Sadly, as a reaction to my opinion, I have been subjected to weeks of vitriol. One of my posts had over 56k comments! Yet I was silent but now people close to me who have nothing to do with this - my family, my friends, my co-workers and even my dad's personal WhatsApp are being flooded with abuses and harassment. My daughter's page is nothing less than a barrage of abuses and this is not acceptable to me," Neha added.

"What a man or a woman does in a relationship is their choice and moral choices are always ambiguous. But no matter what they are, they cannot lead to physical abuse. I stand by the fact that NO MATTER WHAT ... physical abuse or assault is not acceptable. Obviously, a man's physical strength is a lot more than girls and gender-based violence against women is a huge problem in our country and across the world... I urge people, whether a man or woman, to educate themselves about domestic violence... If you're a victim of abuse, please stand up for yourself. You are not alone," she concluded.

Neha's attitude, however, did not find favour with netizens, with many users alleging she was a "fake feminist".