When Priyanka Chopra was targetted by trolls yet again, hubby Nick Jonas came to her rescue in the most epic way!

New Delhi: International stars Priyanka Chopra and Nick Jonas are often seen backing each other up on social media. The couple is often a soft-target for trolls due to their age gap. However, they sure know how to respond to them!

So when Priyanka Chopra was targetted by trolls yet again, hubby Nick came to her rescue in the most epic way!

It all began when Pee Cee shared a picture with Nick, congratulating him for owning his own Tequilla brand. “So proud. When you own your own tequila at 27! @villaone”, she had written on Instagram along with sharing a picture with her dear husband.

However, some social media users focused only on the caption. They were quick to point out that Nick is 26, and that Pee Cee doesn't know her husband's age.

To this, Nick had a hilarious response. He shared a meme on his Instagram stories and wrote, “@Priyankachopra definitely knows my birthday everyone'' 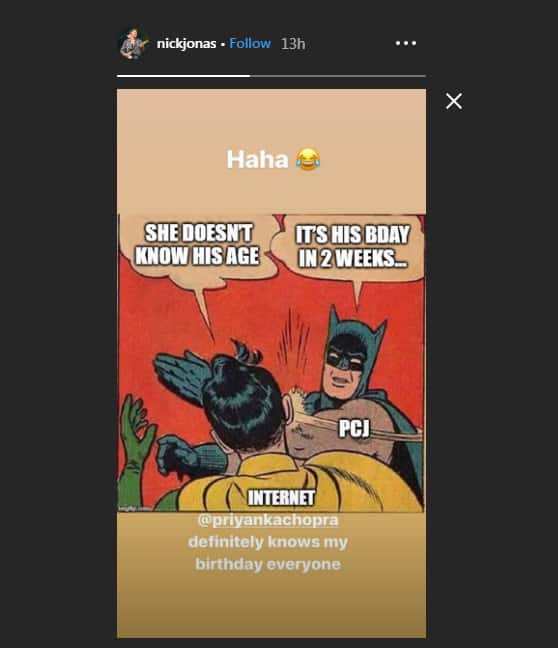 Priyanka and Nick often indulge in social media PDA and shared loved-up pictures on Instagram. They have an army of fans who love to see the couple together.

Nick and Priyanka got married in a private wedding ceremony on December 1, 2018, as per Christain traditions. A day later, on December 2, they tied the knot again in a Hindu ceremony.